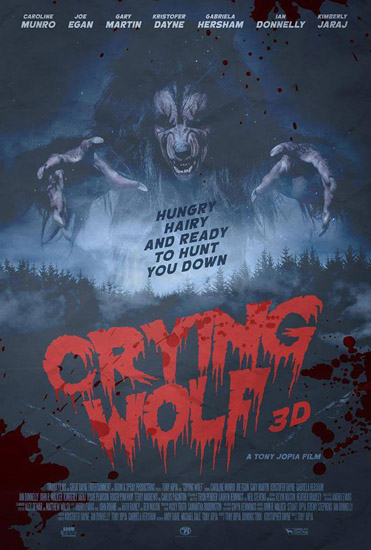 Synopsis: From the Director of ‘DEADTIME’ and ‘Zombie Harvest’ comes Crying Wolf! They’re Hungry, Hairy and ready to hunt you down! The comedy horror Crying Wolf tells the story of strange and weird goings on in a little English village called Deddington. The gruesome death of local girl Charlotte by a rabid monster causes alarm and revulsion – before desperate reporters, crazy detectives and revenge seeking hunters descend on the scene! Crying wolf is a fast paced British comedy horror that will keep you howling for more!

Our Thoughts: ‘Crying Wolf’ is fun and gory, entertaining new b-movie creature feature. British comedy horror that packs a lot of action and a lot of werewolves into it’s small film.

A private detective looking for a news reporter, who went missing shortly after investigating a girl  killed by monster in the small town of ‘Deddington’, buys a mysterious book about werewolves. In the book are stories about a prankster named Andy whose friends don’t believe him when he says he’s been bitten by a werewolf, due to his “crying wolf” so often in the past, and ends up turning his friends into a pack.

With lots of gore, killing and cheesy jokes, I found ‘Crying Wolf’ to be entertaining. I’m not usually a fan of British comedy, aside from things like ‘Sean of the Dead,’ so that was the only aspect that didn’t appeal to me. I only found some of it to be funny. Despite that, the film has over the top gore and a fast paced story that I really liked. Some of the effects are better than others, but it’s a very small film so don’t expect anything really amazing. An interesting story, a high body count, along with the fact that there are a lot more werewolves in this film than in most in the genre, are the strongest points for ‘Crying Wolf’. Kristofer Dayne was great as Andy and Gabriela Hersham was believable as jealous girlfriend Milly. For horror fans looking for a fun werewolf flick, ‘Crying Wolf’ is a good choice.