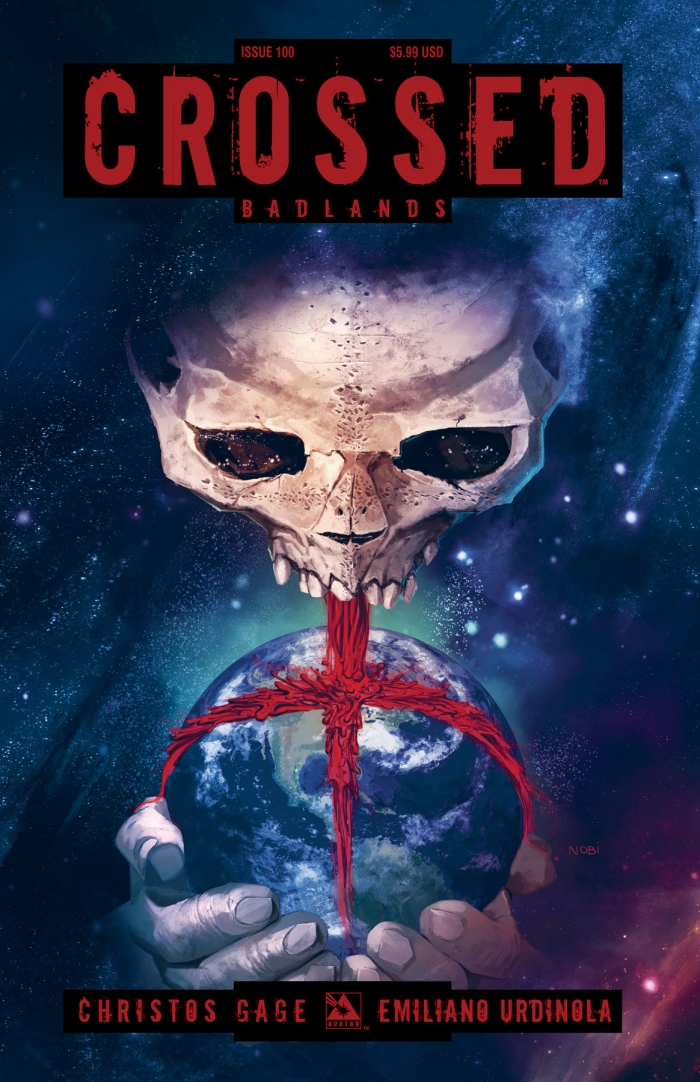 This is the way the world ends in the final issue of Crossed: Badlands!

Celebrate eight years and hundreds of stories from Garth Ennis’ unrivaled horror series with this tremendous 64 page, ad-free issue! Join Crossed scribe Christos Gage as he delivers the final installment of the Smokey trilogy, and this may be the end of life as we know it! To help celebrate this amazing milestone we pack this issue with incredible extras celebrating the original series artist Jacen Burrows! We start with including the rare original Jacen Burrows sketchbook and an enormous cover gallery of the rarest and previously uncollected Jacen Burrows Crossed covers. There is no help. There is no hope. There is only the Crossed.

Available with Regular cover by German Nobile, Wraparound & Good Eating by Daniel Gete, Torture & Summer Fun by Nahuel Lopez. Also available are the ultimate collector limited editions – a Fairy Tale Century Set of three sexy covers by Emilio Laiso which are limited to 100 each, and a Costume Change Set of six covers by Christian Zanier limited to 250 sets!

Avatar Press also offer a Deluxe Collector Box Set that is full of ultra-rarities and is limited to just 50 sets! They start with all 15 covers offered here, including the Century and Costume Change Sets! They then reach back through time and offer an extremly rare variant of the very first series, Crossed #7 Pure Art. Also from the first series, the original Crossed #1 signed poster edition with Garth Ennis and Jacen Burrows signatures. For the card collectors, They added in signature cards from Garth Ennis and Simon Spurrier. It kicks into high gear with an original Crossed color sketch cover from Matt Martin! To top it all off, an exclusive Crossed: Badlands #100 Box Set Century cover featuring the original B&W art to the first cover Jacen Burrows ever drew!