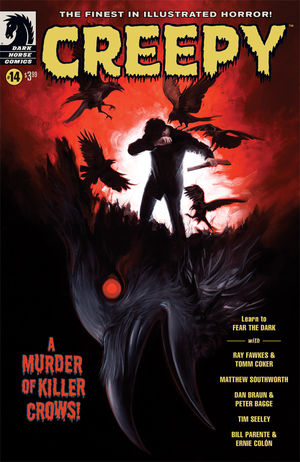 Synopsis: You can’t believe how many things there are to be afraid of! First, forget black cats—Ray Fawkes (Justice League Dark) and Tomm Coker (Zombie Bomb!) will make you terrified of blackbirds! And Matthew Southworth (Stumptown) takes you further into the dark than you’ve ever imagined! Better learn to read from behind your fingers!

Our Thoughts: The Creepy series is so consistently good that it’s often hard to poke holes in it. The issue would be my exception and that is strictly my opinion. You see, I don’t really like stories that involve hurting animals. I tend to overlook it if the violence moves the story along, but if it doesn’t appear to be needed then I tend to not like the story. This issue of Creepy has not one, but two stories with animal violence. The first story, Black Feathers, is entirely about the repercussions of an ignorant view of crows and some terrible actions towards them, so the violence is there as needed to make you hope for the comeuppance from the crows. The second story, however, takes a hammer to a dog for reasons not easily discernible. This is unfortunate, because Blind Contour does an otherwise extraordinary job of capturing the loneliness and vulnerability of a person losing their sight. This story will get under the skin of anyone who has had a significant illness or injury that has rendered them nearly helpless. Had the two stories shown up in separate issues, I probably would not have been as put off by them. As such, these two stories back-to-back makes this one of my least favorite issues of this fantastic anthology series.

Now, don’t mistake this as a review stating that the stories aren’t well told and that the art isn’t fantastic, because it is. Readers less sensitive to animal violence will love this book, especially the depth and hopelessness of Blind Contour. But anyone adverse to seeing animals hurt in comics may want to wait for the next issue of Creepy.

For More Information: Check out the Dark Horse site: http://www.darkhorse.com/Comics/22-727/Creepy-Comics-14.

About: Stephanie Shamblin Gray is a staff journalist for ComicMonsters.com. You can follow her on Twitter @UndeadStephanie. And stay up on all the latest news @HorrorNews