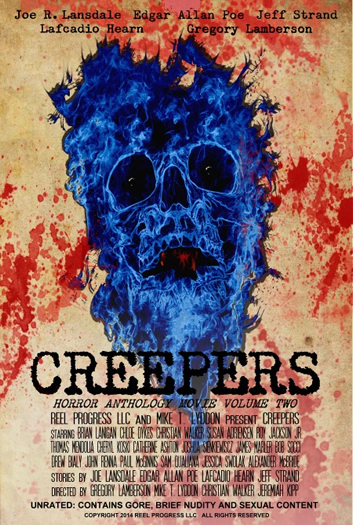 Our Thoughts: Creepers is a classic style horror anthology with stories by various contemporary and classic writers. The format is reminiscent of Tales From The Crypt, with a sinister old house and a pun filled intro to each story. There is a brief story threaded between the tales that ties everything together nicely. Mr. Finley, our story teller, is a horror story obsessed man who is having his taxes done by accountant an accountant. While they are waiting for dinner to be finish cooking, Finley reads him short horror stories.

The first tale, inspired by Lafcadio Hearn, is called “Of A Broken Promise” which takes place roughly in the 1800’s. It’s a story about a man who promises his dying wife that he will never love anyone else when she is gone. Just a year after she passes, he marries again. During a one of his business trips, his new wife is haunted by the ghost of his dead wife. What ensues is a very menacing ghost story. I found it to be one of the scarier tales from the anthology, with a great finish.

The second tale is based on the Edgar Allan Poe story Berenice, however is set in modern day. It begins with a very awkward man named Edward who is told by his parents, whom he lives with, that his cousin Berenice is coming to live with them.  Berenice is extremely sick, with what appears to be a terminal illness. It becomes apparent that the two had a romantic past and they resume their relationship when she moves in. Edward is very creepy, watching her and often fixated on her teeth. Berenice takes a turn for the worse and Edward has to take care of her. This story isn’t so much scary as disturbing. This film was a good modern take on Poe’s original work, with horrific and memorable ending.

Tale number three was more of a horror comedy. “Gave Up The Ghost” is based on a story by Jeff Strand. It begins with a writer penning his first novel, when his suddenly crashes and he loses the entire book. Despite telling the audience what a genius he is, he didn’t back up his novel at all. In an insane and unexpected turn, the repair technicians inform him that computers have spirits just as people do and they can do a ritual to try and get his book back from the ghost of the computer. The story becomes very amusing at this point, with an ending that really made me laugh. It’s a nice change of pace from the dark stories preceding it and it has the most original story of the anthology.

The last feature is called “By The Hair Of The Head”. A man named Joseph rents a room from a man named Arthur, who reveals that he was a ventriloquist. The next day Arthur says he was just doing some ventriloquism and tells him about his dummy. When he leaves the house, Joseph sneaks into his work room to see the doll, which is awfully scary looking for a ventriloquist dummy. Though this story moves at a slightly slower pace than the others, it progresses to become the other most terrifying tale from this horror anthology.

Overall this horror anthology is a collection of enjoyable, eerie stories that gives the viewer a healthy variety of styles from the horror genre, ranging from ghost stories to psychological horror, and even comedy.  Each short is interesting and keeps you watching and wondering what is going to happen next. Although I felt the acting wasn’t top notch, there were a few standout roles. Catherine Ashton who plays Caroline in the first tale was excellent, as well as Thomas Mendolia, who plays Edward in the second story. As with many indie films, the special effects don’t really do the story and concept justice and with a bigger budget this film would easily have scored a rating of 8 of 10. If you are a fan of horror anthologies chances are you will enjoy this collection!