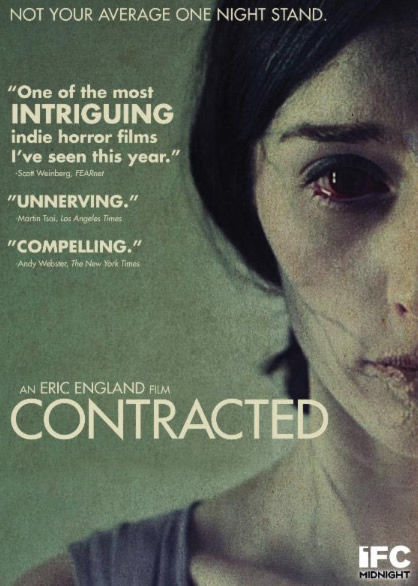 Contracted is described as:

After a break in her relationship with her lover (Katie Stegeman), twentysomething party girl Samantha (Najarra Townsend, Me and You and Everyone We Know) has to move back in with her overbearing mother (Caroline Williams, Hatchet III, The Texas Chainsaw Massacre 2). Things seem to be at an all-time low until Samantha soon finds escape in a one-night stand with a mysterious man (Simon Barrett, V/H/S, 24 Exposures), but their encounter leaves her hung-over, guilt-ridden – and infected. Uncertain of the ailment she’s caught an knowing little about the man who gave it to her, Samantha attempts to hide her deteriorating condition from her loved ones. But she soon realizes that she is not just the victim of an STD, but the host of something much more catastrophic, and that she and those around her are in mortal danger. Part zombie film and part body-horror shocker, CONTRACTED, from writer-director Eric England (Madison County), is a skin-crawling experience offering “unnerving rewards” (Andy Webster, The New York Times).