Our thoughts: James Wan has done what few directors are able to do with his sequel to The Conjuring. He made a better film with a more complex story and a more terrifying villain.

Much like the last film, The Conjuring 2 begins with a flash back to another Warrens case file. We start with the famous Amityville case, after which Lorraine said she no longer wanted to take on cases. The story then cuts to a a family, whose little girl named Janet who becomes the target of a malevolent spirit.

Unlike the last film, or many haunting cases, this spirit is brash and even takes action in the presence of police who are called. It begins getting media attention, at which time the church gets involved and contacts the Warrens, whom are sent to check out the validity of the claims.

Those of us who have watched a lot of James Wan films know what to expect going in. For the first half of the film, it feels like more of the same, with his signature atmospheric build up of tension and clever jump scares. However, with the addition of more action than we saw in the first film and a more complicated story, Wan takes his horror game up a notch with this sequel.

Usually when films are too heavy handed with CGI it is to their detriment, resulting in cheesiness. The Conjuring 2 skirts that problem, making the best use of computerized effects I have seen in a long time. The result is a truly horrifying villain, who can take on other forms to terrorize its victims.

Patrick Wilson and Vera Farmiga are perfect as Ed and Lorraine, as always. Madison Wolfe is excellent as tormented daughter Janet.

My main criticism of the film is the way it ends. Even if that was how it ended in reality, since the film is based on a “true story,” I still do not like these kinds of endings. In addition, there is a bit of added sappiness, with extra focus paid to Ed and Lorraine’s romance. Even though I also disliked the end of the first film, my issue with it being the same, it at least had the mention of Amityville to balance it, which made it a better ending in my opinion. Personally, I don’t like endings that are so cleanly wrapped up. But that’s just this reviewer. You decide for yourself.

The Conjuring 2 is an excellent film and an impressive sequel to it’s predecessor. It’s well worth the trip to the theater for any horror fan. 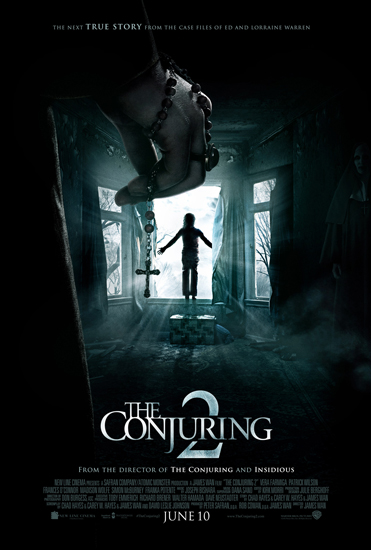