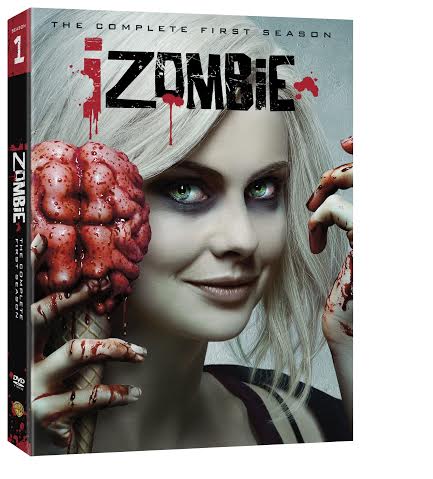 Just In Time For The Second Season On The CW, Feast On This…

DVD Features All 13 One-Hour Episodes From The First Season, Plus Enhanced Content

September 29, 2015. iZOMBIE, the new hit series that nearly 3 million people are tuning in to

weekly on The CW, stars Rose McIver (Once Upon a Time, Masters of Sex), Malcolm Goodwin

(Once Upon a Time, The Vampire Diaries).  The 3-disc DVD set includes all 13 episodes from the

iZOMBIE stars Rose McIver as Olivia “Liv” Moore, a medical resident on the fast track to a

perfect life … until she’s turned into a zombie. Now stuck between half-alive and undead, Liv

humanity — human brains. But there are side effects to Liv’s new diet. With each brain she

consumes, she experiences flashes of the corpse’s memories — including, at times, clues as to

how they were killed. Her boss, a brilliant but eccentric conspiracy theorist, encourages her to

… and quiet the voices in her head.

Entertainment’s Vertigo imprint. The series was developed for television by Thomas &

Ruggiero-Wright, who executive produce along with Danielle Stokdyk (Veronica Mars) and Dan

2. Brother, Can You Spare a Brain?

5. Flight of the Living Dead