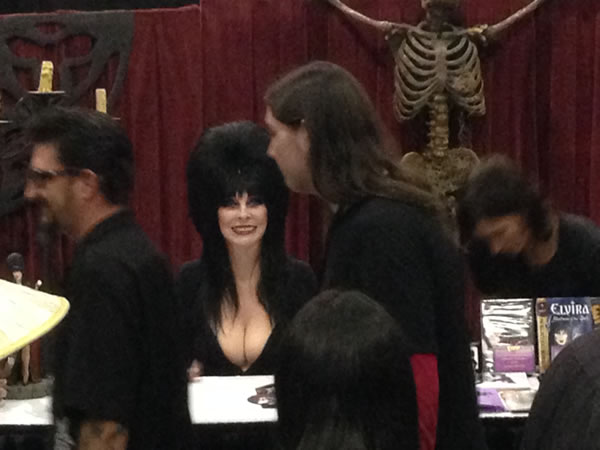 This weekend HNN was at Stan Lee’s Comikaze is Los Angeles.  The event is held annually at the Los Angeles Convention Center, Comikaze assembles the most exciting and innovative in comics, video games, sci-fi, fantasy, horror and all things pop-culture.

Here is what staff member, Stephanie Shamblin Gray had to say about the event:

In a brilliant move, Comikaze has put their “Main Stage” on the Exhibit Hall floor. This is a wonderful move that let’s people see some quick action, like a 15-minute interview followed by a 10-minute question and answer session with Michael Rooker, a.k.a. Merle Dixon, of The Walking Dead fame. The real benefit of this is that it does not require you to leave the area and as soon as the guest has left everyone can just continue to shop, get autographs, etc. Large screens make it visible from a distance and because it is in the open fans aren’t spending hours  waiting for seats.

And if you like throngs of cosplayers, Comikaze is definitely for you! So many people were not only in costume, but in very good costumes with a lot of horror themes. We couldn’t snap pictures fast enough. Moreover, there were many gorgeous ladies dressed up not just as female characters, but your favorite male characters, too! I’ve never seen so many female Ash cosplayers!

Overall, Stan Lee’s Comikaze Expo is a fantastic addition to the Southern California convention circuit.   If you haven’t had a chance to attend yet, put it on your list for next year. Check out their website at http://comikazeexpo.com and follow them on Twitter @StanLeeComikaze for updated information.