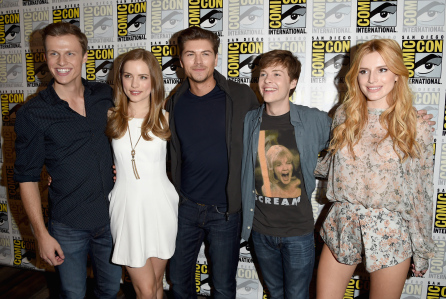 SAN DIEGO, CA (July 10, 2015) — MTV slashed into the San Diego Convention Center today with the first-ever Comic-Con panel for its hit new series “Scream,” the most-watched series premiere of the summer on cable with Millennials.

The network unveiled an all-new trailer for season one, hinting at the twists, turns, and gruesome deaths to come.   Bella Thorne, whose character Nina Patterson endured a bloody, bikini-clad death at the hands of the killer in episode one, shocked the crowd by announcing that she would return to the series via a mysterious flashback in an all-new episode of “Scream” airing Tuesday, August 25th.   “Scream” airs Tuesdays at 10:00 p.m. ET/PT on MTV.

Comic-Con goers can stop by MTV’s “Scream” booth on the convention center floor. The booth (#3729) will be open Saturday, July 11th from 3:30pm to 5:30pm, where fans can attend signings with special appearances by cast members.  The booth will also feature activations where fans can experience their own bloody death with a photo booth based off of “Scream.”

In the next episode of “Scream” airing on Tuesday, July 14 at 10:00 p.m. ET/PT, Emma learns that her mother has been keeping more secrets just as the Killer challenges her to a dangerous game.

MTV and Dimension TV’s “Scream” is based on the eponymous, international hit horror franchise. After a cyber-bullying incident results in a brutal murder, the shocking violence stirs up memories of a  killing spree from the past that has haunted some, intrigued others and maybe just inspired a new killer. A group of teens – with two old friends struggling to reconnect at its heart – become lovers, enemies, suspects, targets and victims of a killer who’s out for blood.