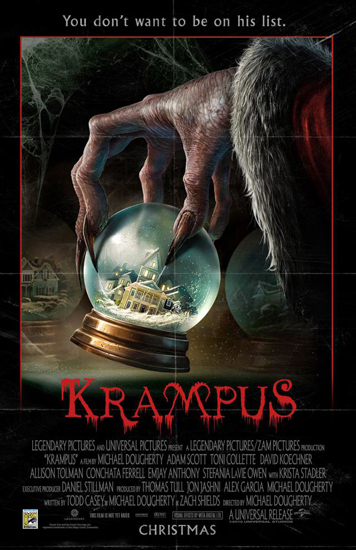 CA new poster for the upcoming ‘Krampus’ movie from Legendary pictures was posted on the film’s social media pages this weekend.  The film had a panel at Comic-Con this weekend as well, which featured director Micheal Dougherty, along with stars Toni Collette and Adam Scott.  They brought the first trailer for the film with them, which has yet to hit the web.

Scott spoke about the film saying “It felt like we were a functional, dysfunctional family living in a house and these monsters were actually trying to kill us.”

Dougherty said that the film has a feel similar to 1980’s horror classics like Poltergeist, due to WETA building the monsters for the film.   He said “The slime looks so much better when it’s real.”

You can view the new poster below.