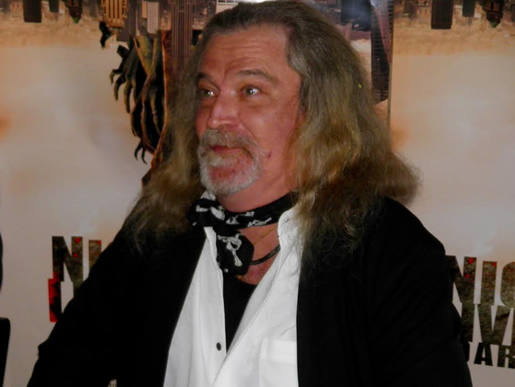 Comic-Con Coverage of ‘Night of the Living Dead: Darkest Dawn’

Years in the making, this CG re-imagining of the 1968 film “Night of the Living Dead” features the voice acting of some of our favorite horror actors including Tony Todd, Danielle Harris, Bill Moseley, R. Madhavan, Joseph Pilato and Tom Sizemore. The film was shown outdoors at Petco Park in the same location that had the Walker Stalker panels earlier in the afternoon and it definitely had the drive-in movie vibe. The screening was also very near The Walking Dead Escape where entrants were screaming in terror. This all made for the perfect place to have a zombie movie premiere.

While what was shown was somewhat shorter (approximately 65 minutes) than the actual theatrical release will be, director Krisztian Majdik has done a great job with the pacing. He was also able to build suspense and get in some pretty good jolts – not an easy feat when working with animation.  Majdik and actor Joseph Pilato, who plays Harry Cooper in the film, were on hand to meet and greet fans. Pilato, perhaps best known as Captain Rhodes in “Day of the Dead,” was able to spend quite a bit of time with each fan which was appreciated by all. The fans that were over 21 were invited to stay for an after-party which was attended by the likes of indie scream queens Jessica Cameron and Heather Dorff.

More information about the release of the film will be available in August. HorrorNewsNetwork.net will keep you posted.

Synopsis: NIGHT OF THE LIVING DEAD: DARKEST DAWN is a new fully CG take on the 1968 classic, “Night of the Living Dead.” This is the story of a group of survivors fighting to stay alive when a mysterious plague unleashes the undead on New York City. Barricaded in an abandoned apartment building, the characters from the original film face new terror and question each other’s compassion and sense of humanity as they fight to stay alive against the army of the walking dead…It was directed by Krisztian Majdik, Zebediah Y. Desoto, and written by David Schwartz, Zebediah Y. De Soto, Jib Polhemus, and Mario Goldstein.