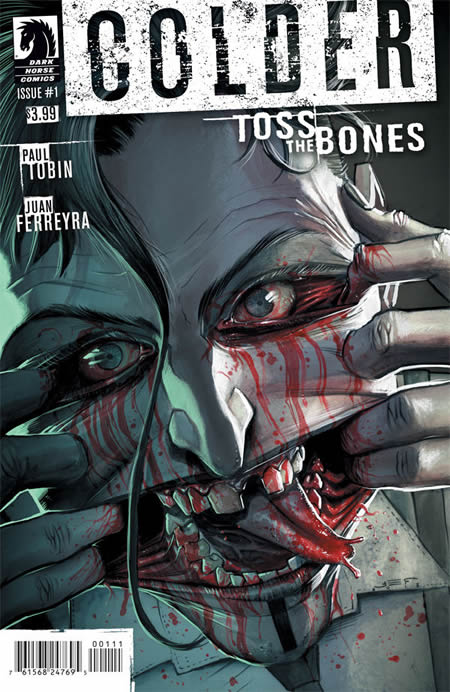 Synopsis:  Declan come to grips with the physical loses from his previous encounters, as Nimble Jack creates Havoc in and around Boston.

Our Thoughts:  Multi-talented writer Paul Tobin embarks on his second series featuring his creator- owned hero Declan in a bizarre and horrific world.  Tobin, an Eisner award winner for his series Bandette and frequent contributor to Marvel’s kid’s comics line Marvel Adventures, infuses this very dark supernatural tale with all the requisite elements (a devilish trickster, mutilation, Lovecraft-esque creatures) but also adds in moments of realism with mundane moments like a trip to the supermarket.  This is what separates Tobin’s work from more run-of-the-mill horror stories.  In fact, these moments in between the chaos that Nimble Jack causes are what make the story stand out.

The other main attraction here is Juan Ferreyra’s artwork.  His panted scenes are reminiscent of early Heavy metal and Epic artists with hints of both Val Mayerik and Bernie Wrightson.  While these influences are noticeable, his style is all his own and is an upgrade from much of the “realistic” art style of today’s comic artists.  His beautiful and horrific cover art on this issue and early entries in this series are worth the price on the book alone.  They will haunt you long after you see them, which is why you’re buying a horror story in the first place.