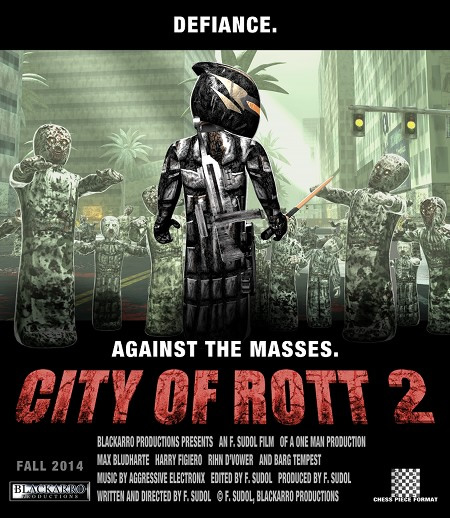 Eight years after the Rott Worm Plague decimated planet Earth, Harry, a Walker Fu Master, joins forces with an outcast Scout, Max Bludharte. Against all odds, the duo must find a cure for Max’s ever-tormenting skinworm infection, uncover the mystery of a crashed UFO, and put a stop to an evil Tyrant and his Army of ruthless Scouts. Meanwhile, a mysterious lone Assassin is hellbent on killing all in his path as he lures endless Zombie Hordes into the city. A bloody trail of death and destruction follows at every turn in the epic “City of Rott 2”.

City of Rott 2 will be available for DVD on Amazon.com and is separately being rendered in HD 1080p Resolution for Blu Ray,  while currently seeking Blu Ray Distribution in the US and Worldwide.