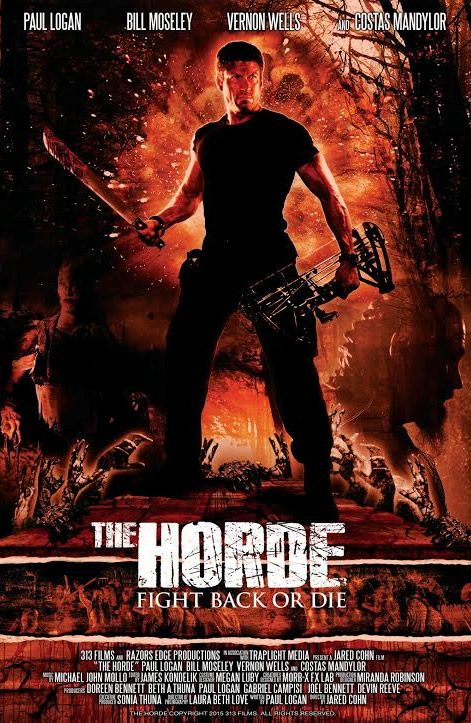 313 Films and Razors Edge Productions has announced that they signed worldwide marketing rights and representation for their feature film THE HORDE with Circus Road Films of Los Angeles. The action-horror film features a cast of horror icons, including Paul Logan (“Code Red”), Bill Moseley (“The Devil’s Rejects”), Costas Mandylor (“Saw IV”) and Vernon Wells (“Mad Max 2: The Road Warrior”). The film is currently in post-production with expected completion in early Summer 2015.

Glen Reynolds, the CEO of Circus Road Films, says, “The Horde is a wild and scary ride for fans of action and horror. We are so very proud to be representing the film for worldwide distribution.”

313 Films also released the movie’s poster today, allowing a sneak peek at the various action and horror elements from the movie.

Filmed in Los Angeles, the film follows ex-Navy Seal John Crenshaw (Paul Logan) as he accompanies his girlfriend and her students on a weekend nature-photography expedition deep into the woods. What should be an educational and fun-filled weekend turns into horror as the group is besieged by an unspeakable evil: a horde of hideously disfigured, mutated humans with an insatiable taste for blood. As things go from bad to worse, Crenshaw becomes their only hope if they want to reemerge from the woods alive.

THE HORDE is directed by Jared Cohn and written by Paul Logan. It is produced by Doreen Bennett, Beth A. Thuna, Paul Logan, Gabriel Campisi, Joel Bennett, Devin Reeve and executive produced by Sonia Thuna.