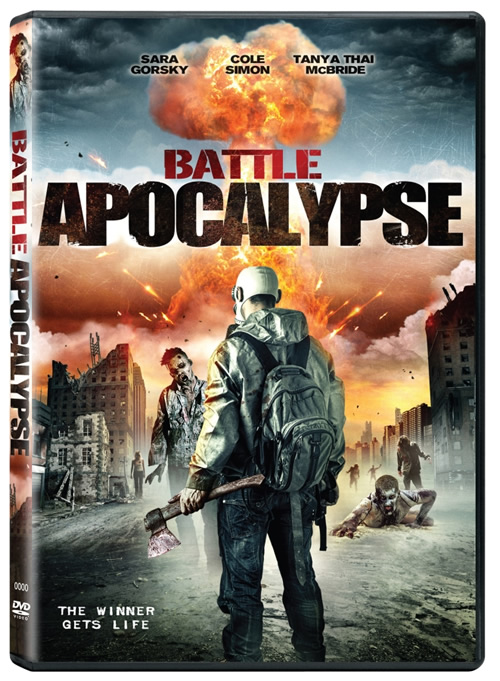 ‘Chyrsalis’ Coming to DVD on February 24th as ‘Battle Apocalypse’

The award-winning post-apocalyptic zombie film Chrysalis, following a successful run at film festivals across the country, will be released in North America as Battle Apocalypse by Barnholtz Entertainment via Cinedigm. It will be available for purchase on DVD starting on February 24, in addition to its already-available digital form.

Funded entirely by Kickstarter donations and serving as a prime example of the new wave of crowdfunding sweeping the indie film community, Battle Apocalypse is a showcase for Glass City Films, the award-winning Chicago-based company, and for the incredibly talented cast and crew available in the Midwest, including award-winning actors Sara Gorsky (Best Actress: NYC Horror Fest, Tucson Terrorfest, Miami SciFi Fest, NOLA Horror) and Cole Simon (Best Actor: Trail Dance Film Festival).  Glass City Films founder and Battle Apocalypse director John Klein says, “We’ve had an amazing groundswell of support, first through the Kickstarter campaign and now out on the festival circuit. We have always put Midwest talent on par with what’s available on the coasts, and this film really showcases what we have to offer here.”

Cast on the surface as a zombie-centric horror film, Battle Apocalypse – produced in association with Huckpoten Entertainment and written and lensed by Ben Kurstin – soon reveals itself to be more about the drama of survival in a harsh world than the guts and gore traditionally associated with the genre. As viewers follow Josh (Simon) and Penelope (Gorsky) through a post-apocalyptic world decades removed from the outbreak of an infection, the most terrifying aspect for audiences will be the snapshot they see of the future their cities might encounter. When the nomadic duo rescue the mysterious Abira (Tanya Thai McBride) and slowly determine what secrets she may or may not be hiding, the true terror begins.

As Chrysalis, the film is already available on VHX at  www.TheRestAreDead.com and on Vimeo On Demand for streaming or purchase. The film has won several awards and screened at dozens of film festivals, including the Wasteland Film Festival, the New York City Horror Film Festival, and the NOLA Horror Film Festival. Beginning February 24, Battle Apocalypse will be available at various retailers in-store and online, including Walmart, Best Buy, Amazon.com, K-Mart, and Movies Unlimited, and several others.  Both available versions include behind-the-scenes features.

Klein says, “We were incredibly ambitious from start to finish with this project. We believed in Ben’s great script and story, and knew we could do the film at a certain cost and make it look amazing regardless of the bottom line.  And we’re so proud and honored that Barnholtz Entertainment recognized the quality of our film and saw fit to give it a wider release through Cinedigm!”