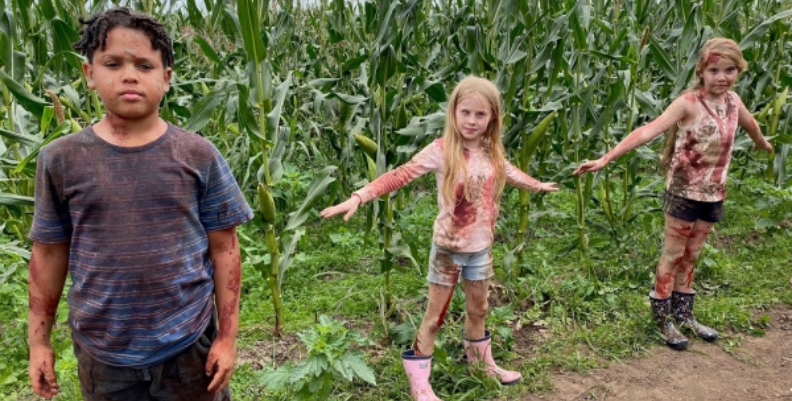 During this unprecedented pandemic, we could now add the Children of the Corn remake to the list of essential services! Writer/director Kurt Wimmer and his crew completed the shoot for the new film with the help of some health and safety protocols, and an assortment of insurance policies.

In an interview with Variety, producer Lucas Foster shared some details on how they were able to accomplish such a feat:

“You can theorize all you like about safety protocols, but until you get on set, you don’t really know. But I can now tell you it is impossible to keep a camera crew 1.5 meters apart… We ended up taking hundreds of measures. We did not trust the whole. Instead, we broke down every scene separately. Night. Day. Crowds. Interiors. And so on, assessing different levels of risk.”

Foster bought insurance policies very early on in the pandemic. Shortly thereafter, insurance companies stopped offering them, which is why Corn got to proceed with production while so many other movies are currently suspended.

“We had the insurance in place before we hit the ground, and I made sure to have paid the premiums before I left the U.S.,” Foster said. “I treated the film like an indie movie, one with no margin of error and lots of insurance.”

According to Variety, Foster took out three different insurance policies: one for travel, one for production and another for “the kind of specifics that can occur on a horror action movie.”

“We did not use a completion bond. If we had, we would probably have been considered unfilmable and got shut down.”

Fans who are looking for a Children of the Corn remake that closely follows the 1984 original (based on a short story by Stephen King) may not get what they’re looking for as Foster says the new film has, “almost nothing to do with” the original. He says, “We went back to the (Stephen King) story and free-associated from there.”

Children of the Corn is expected to release in theaters in 2021. Stay tuned to Horror News Network for complete coverage of this upcoming film as soon as it breaks!