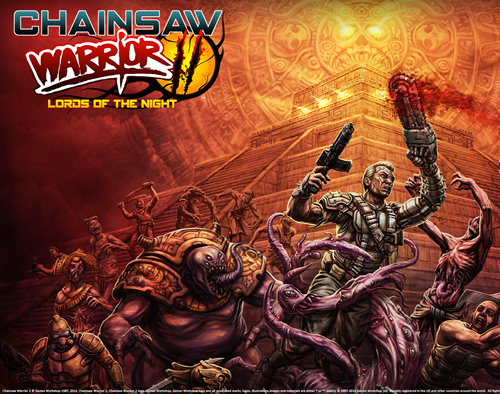 Indie developer, Auroch Digital, has announced a sequel to their 2013 adaptation of the cult Games Workshop board game ‘Chainsaw Warrior’, to be released on Steam and mobile devices this winter.

Chainsaw Warrior, which came out on iOS, Android and Steam last year, was an adaptation of the 1987 classic from Games Workshop, famous for its challenging difficulty. Described as “an incredibly faithful adaptation” (Forbes) Chainsaw Warrior won support from fans of the board game and new players alike with its punishing campaign, and the sequel promises to maintain that intensity while adding stacks of new challenges to test players.

Chainsaw Warrior: Lords of the Night, sees players once again fighting against the clock as they battle through decks of deadly traps and fierce creatures. Lords of the Night introduces an upgraded combat system, new weapons, upgrades, powers and equipment, unique mini bosses that require careful tactics to defeat, three new zones to fight through and an even tougher confrontation with the enigmatic Darkness than ever before.

“Chainsaw Warrior will always be, at its heart, a board game. It’s important to us that people who played the original can jump right in and feel at home, but at the same time we want to use this opportunity to build on the challenge and add in some tricks that the digital format opens up for us” said Steve Martin, the game’s designer at Auroch Digital.

To celebrate the announcement, Auroch Digital have partnered with Vodo for a 50% off sale until the 5th January on the Steam version of the original Chainsaw Warrior, giving players a perfect opportunity to catch up with the story so far.

The game will be released on Steam, iOS and Android devices this winter for $4.99.

For more information, visit the Chainsaw Warrior website at  chainsawwarrior.net.