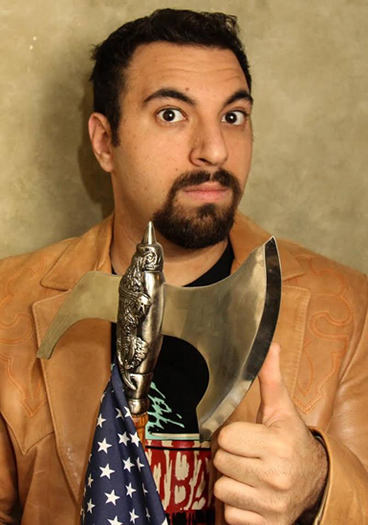 Catching Up with James Balsamo and Acid Bath Productions

Horror News Network: So James, you have had quite the year with the release of Bite School. As usual, you mix up the comedy with horror pretty well. How do you manage to maintain that, while keeping the appeal to horror fans?

James Balsamo: I’m a big fan of splatstick movies. I think if you have a good amount of gore, a jump scare and a pie to the face you’re all set. That’s the formula for a horror-comedy.

James Balsamo: Acid Bath Productions is a growing name in the industry and we’re always excited to work with new people and help build a following in the community. It’s also worthy to note an incriminating photo goes a long way.

James Balsamo: Our casting process is really complex. A lot of work goes into the entire process and it involves a series of auditions and usually a lot of debate. We’ve luckily been incredibly happy with the casting choices we’ve made but are always seeking new talent as well.

Horror News Network: You pretty much star in all your films. Tony is pretty much the opposite of Rich from Cool as Hell. Where do you come up with the characters you develop for yourself?

James Balsamo: Rich really gets abused in Cool as Hell for no reason – just for being a loser. So I wanted to play a character that everybody admired for being wealthy and then once he lost everything they’d treat him as the same loser Rich was. Overall I think Tony takes a lot more abuse than Rich did in Cool as Hell – he gets hit with a pie and peed on!

Horror News Network: In 2016, you have Killer Waves coming up. Can you tell us a bit about what we can expect?

James Balsamo: Expect Killer Waves to be my most brutal film to date! Killer Waves is a straight forward splatter flick, not a comedy! It’s about a slasher killing surfers to make a human flesh surfboard. The film already features Phil Anselmo from Pantera, and Superjoint, Frank Mullen, Chris Mulkey, Robert Maillet, and members of GWAR and the Aquabats!

Horror News Network: What else can we look forward to from Acid Bath Productions in 2016?

James Balsamo: We’re really excited to be working on Killer Waves right now and heading to Los Angeles to shoot it. There are a couple of other things in the works, but I don’t want to give away too many secrets right now. Just stay tuned to Acid Bath on Facebook and Twitter for the latest shenanigans.