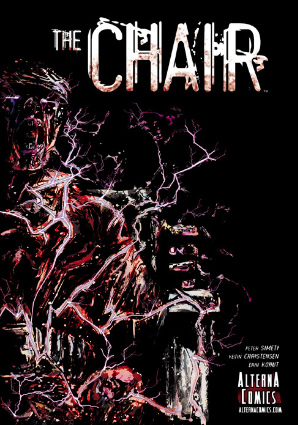 Casting Announcements Revealed for ‘The Chair’

The Chair, from Alterna Comics, is working its way toward the big screen.

The Chair is described as:
Richard Sullivan is an innocent man struggling to escape his fate on death row. Witnessing the brutal torture and murder of his fellow inmates, will he find a way to survive or will the insane events of the prison finally consume him?

Read on for the official update from the company.

Pre-production for the film of one of Alterna’s first year titles, THE CHAIR, is well underway with major casting announcements.

There are currently several notable actors in talks for other roles, including that of the lead, RICHARD SULLIVAN, the MOTHER, TUDLEY, MR. BATES, guards RILEY and ALVAREZ, and many more.

Financing is being raised and investor proposals are being considered.  Director Chad Ferrin is on board with a screenplay written by Erin Kohut, who edited the graphic novel.

Bill Oberst Jr. (CHILDREN OF SORROW, CIRCUS OF THE DEAD) has been cast to play the psychotic and sadistic WARDEN. An indie horror icon, Oberst Jr. will have no problem bringing the role to life.

Eric Roberts (THE DARK KNIGHT, THE EXPENDABLES) has been cast to play one of the lead guards, MURPHY. The veteran actor is more than up to task for this role as a sarcastic and brutal guard that takes pride in making RICHARD SULLIVAN’s life a living hell.

Joining Eric Roberts in the prison guard crew, Derrick Damions (THE DAY WE DISAPPEAR, ONE LIFE TO LIVE) will portray the crafty and sinister SIMMONS.

Jacob Banser (DIG A HOLE AND DIE) rounds at the cast at this time, as he has been cast for the role of JIMMY/BONES, the only inmate in the prison that Sullivan calls a friend.