Cap’n on the bridge! In case you missed the celebration, this week marked the anniversary of the sinking of the Elizabeth Dane–the doomed ship commanded by Captain Blake of The Fog infamy.

The Fog–the 1980 cult classic horror flick from John Carpenter–introduced fans to the vengeful ghost of Captain Blake–out for blood in a spectral attack against a coastal town. And now, NECA has rolled out its own six-inch scale figure of Blake as part of the sixth season of its popular Toony Terrors line, as reported by news.toyark.com. Check out the advance image of the pint-sized terror on this page.

The nautical figure looks ready to wreak vengeance on the residents of Antonio Bay, Calif. as it brandishes its menacing cutlass high above its undead head. Blake joins such Toony Terror luminaries as Jason, Freddy, Nosferatu and a host of other horror standouts.

The Fog–with Carpenter in the director’s chair and a screenplay by Debra Hill and Carpenter–boasted an all-star cast of Adrienne Barbeau, Jamie Lee Curtis, Janet Leigh, Hal Holbrook and Tom Atkins.

The atmospheric horror film told the story of a strange, glowing fog that swept over Antonio Bay as the town celebrated its 100th anniversary. The fog brought with it the murderous ghosts of Blake and his crew, out for revenge against the townspeople for causing their clipper ship to wreck on its shores.

The Fog received mixed reviews from critics at the time, but horror fans embraced it. The film grossed more than $21 million domestically on a budget of just $1.1 million.

Keep reading Horror News Network to get the scoop on the next addition to NECA’s Toony Terrors line. 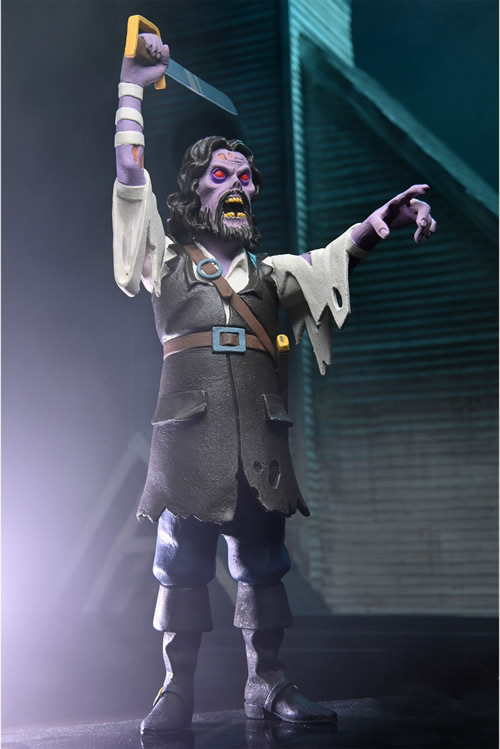