The Ultimate Guide to Candyman

The latest Candyman landed in theaters last August. The R-rated slasher–called a “spiritual sequel” to the original–brought new terrors to horror fans everywhere.

The History of Candyman
Released in 1992, Candyman introduced us to the murderous, hook-handed villain by the same name. Based on the book The Forbidden by master of horror, Clive Barker, and screenplay by Barker and Bernard Rose, the film went on to gross over $25 million worldwide. 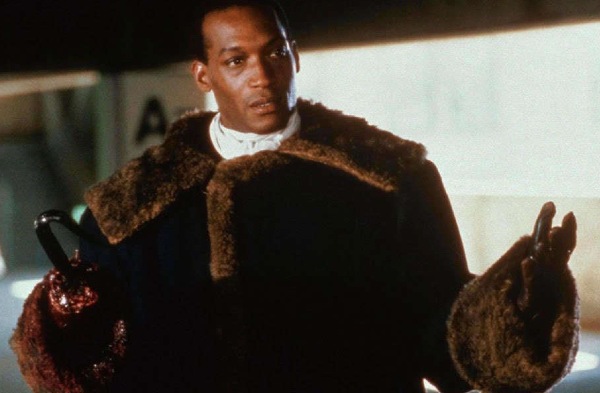 When young Helen Lyle, played by Virginia Madsen, assists her friend with a master’s thesis, she become embroiled in the legend of the Candyman who haunts Cabrini Greens in Chicago.  The myth revolves around a well-off black artist who was murdered for his love affair with a white woman in the 1800s. Helen summons Candyman by repeating his name five times in the mirror, that’s when chaos ensues. Portraying the title role was Tony Todd, man who would become synonymous with Candyman.

The plot of Candyman had many layers outside of the standard gore, there were very human elements to the film.  Whether it was Helen’s personal and marital problems to the complicated relationship between Helen and Candyman, there were very emotional and realistic elements to the film. Helen was a very strong female lead and not exactly what people think of as a “scream queen.” She’s very smart, empowered and in the end, becomes the one to fear. Back in 1992, Madsen discusses her legendary role a not the typical horror victim.

“No, the typical female horror victim runs upstairs to the attic, where she’s obviously not supposed to. Since I was a child, I’ve always been a fan of the genre, and was never able to find a good role, especially for a female. I loved that she was smart, and a strong independent woman, yet the power of love could weaken her. It’s hard to find a very strong female character in general when you’re young and blonde, not many are three dimensional. This was great, I got to cut off my hair, Bernie made me put on 10-15 pounds to, as he said, ‘look like a normal woman.’  So, I didn’t have to be a vixen, I got to be a real leading lady.” 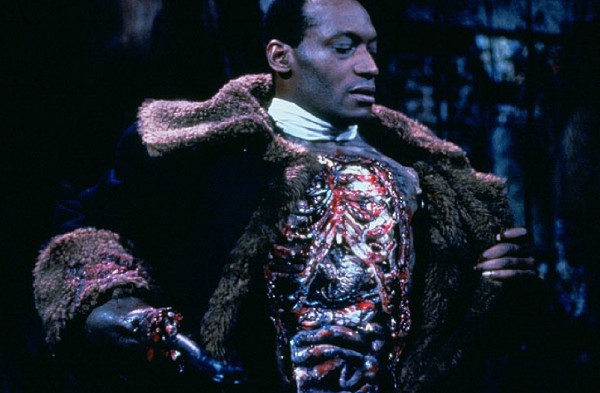 Candyman as a villain also was a bit different than many other genre movies of the time.  He wasn’t necessarily a monster per se, and had more human qualities. Todd carried the role with ease and grace being fierce and violent, but then gentle and loving to Helen.

Candyman Sequels
Following the success of the now horror classic, two more Candyman films followed.  In 1995, Candyman: Farewell to Flesh was released, followed by 1999’s Candyman: Day of the Dead.  Madsen did not return stating in the same 1992 interview, “The sequel that Bernie wanted to make was a prequel where you see Candyman and Helen fall in love, etc. It was turned down because the studio didn’t want to do an interracial love story. I mean seriously!  I guess it was a different time.” Tony Todd, returned for both of the sequels and to this day remains a genre mainstay.

Tony Todd as Candyman
Tony Todd grew up in Hartford, Conn. and attended the Eugene O’Neill National Actors Theatre Institute. In the first of his more than 100 theatrical and TV roles, Todd appeared in Platoon (1986) before achieving stardom for playing Ben in the 1990 remake of Night of the Living Dead.
That part led to his casting in the titular role in the first four films of the Candyman series from 1992-2021. The actor has said, “The ability to be frightening with stillness is what appeals to me,” which perhaps served him well in his most famous role.
In one of the most frightening scenes in Candyman, Todd comes into contact with swarms of bees. As an aside, the actor received a bonus every time he was stung during the filming.
Virginia Madsen as Helen Lyle
Virginia Madsen is a Chicago native who attended the Ted Liss Acting Studio. “I always wanted to make a real career out of acting,” she once said.
Madsen made her film debut in Class (1983) before being cast as Princess Irulan in 1984’s Dune. This background led to her starring role as Helen Lyle in 1992’s Candyman, a part she returned to in the 2021 “spiritual sequel”.
Madsen has also made her mark on the small screen, with roles on such diverse series as Moonlighting, Frasier, Monk, Witches of East End and Swamp Thing.
DeJuan Guy as Jake
DeJuan Guy is a Los Angeles native who was discovered at Marla Gibb’s Crossroads Theater Academy by director John Singleton during the eight-year-old’s performance in A Raisin in the Sun.
That led to Guy appearing in commercials and TV series, but his most famous part came in the 1992 Candyman role of Jake, the neighborhood lore expert who helps save a baby from a fire and who tosses the murderous hook into the coffin at the end of the film.
The actor’s other films include Little Giants, The Cherokee Kid and One Man’s Justice. His TV credits are highlighted by In Living Color, Fresh Prince of Bel–Air, Murder One and Baywatch.
Vanessa Estelle Williams as Anne-Marie McCoy
Vanessa Estelle Williams is a Brooklyn, N.Y. native who began her acting career in 1989 on episodes of The Cosby Show and Law & Order. Three years later, she was cast as Rhonda Blair, the first and only Black regular in the Fox primetime soap opera Melrose Place.
Williams–who ran into conflict early in her career with actor and former Miss America Vanessa Williams due to the obvious identical name–received the NAACP Image Award for Outstanding Actress in a Drama Series for Showtime’s Soul Food (2000-2004).
Williams gained another kind of fame for her role as Anne-Marie McCoy in the first and fourth installments of the Candyman franchise.
Xander Berkeley as Trevor Lyle
Xander Berkeley is a Brooklyn, N.Y. native raised in New Jersey who worked in the theater at the Five Colleges, as well as in regional and repertory theaters and Off-Broadway in Manhattan.
Having more than 200 film and TV projects under belt, Berkeley began with appearances on M*A*S*H, Cagney & Lacey, Miami Vice and The X–Files. His film roles included Terminator 2: Judgment Day, Barb Wire and Air Force One.
Berkeley is perhaps best known for his role as Trevor Lyle in 1992’s Candyman. Mentioned in Candyman 2: Farewell to the Flesh, Lyle–a professor in Chicago–was married to Virginia Madsen’s Helen Lyle.
Kasi Lemmons as Bernadette Walsh
Kasi Lemmons is a St. Louis native who had a passion for movies at an early age, and whose ultimate goal was to become a director. “I wanted to do something more meaningful than going to auditions,” she said.
Lemmons–who currently is an associate arts professor at NYU’s Tisch School of the Arts–began her career with roles in commercials. She eventually moved up to the big screen in Spike Lee’s School Daze (1988) and The Silence of the Lambs (1991).
Lemmons landed the role of Bernadette “Bernie” Walsh, a Chicago grad student and best friend of Helen Lyle, in 1992’s Candyman. The character is slaughtered offscreen by Candyman (an act which, incidentally, won the Dull Machete Award).

HorrorNewsNetwork’s  Sr. Editor, Christine Caprilozzi, spoke with Virginia Madsen to look back on the 20th Anniversary of horror classic …

Ten Things You Might Not Know About … Candyman!
by William Burns

1. There is a Guy Fawkes mask hanging next to Helen’s bathroom mirror. 2. Virginia Madsen claims that …

With Nia Dacosta’s Candyman hitting theaters on August 27, we thought now would be a great time to discuss …

Cabrini-Green: The True Horror of ‘Candyman’
by Rob Caprilozzi

In 1992, the film Candyman introduced horror fans to a new type of killer in a brand-new setting.  While …

‘Candyman’: Horrors of the Hook
by Rob Caprilozzi

When it comes to film, perhaps no other genre is more impacted by score than horror. In 1992, Candyman …