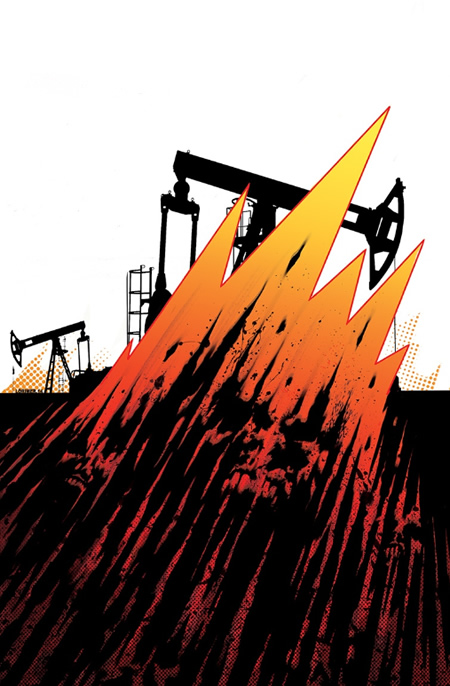 Dana Atkinson, a dishonorably discharged army investigator, is pulled back to the Middle East when a group of American oil technicians disappear under bizarre circumstances. With the help of an Iraqi investigator, what Dana discovers is unimaginable: a series of unusual incidents at the drill site lead her and her unlikely ally to discover a mythic evil that has been released, one that threatens both the lives of the entire region and the fragile peace that exists.

We caught up with the writers of ‘Burning Fields’, Michael Moreci, Tim Daniel to talk about the upcoming series.

Stephanie Shamblin Gray: Can you tell us a little about the story of Burning Fields and the main characters?

Michael Moreci: Sure! We like to think of Burning Fields as The Thing meets Zero Dark Thirty. The stories centers on a series of grisly murders in the oil-rich city of Kirkuk, Iraq. A former military investigator, Dana Atkinson, is pulled back to the Middle East to try and track down the killer. Along the way, she digs into her own muddled past–she has a contentious history with the private military company that guards the Kirkuk oil fields–and discovers that the truth behind these murders is more than she could have ever bargained for.

As you can see, Dana is the lead. She’s tough, smart, and haunted. I love writing her–she fits wonderfully in my pantheon of morally compromised characters. Then there’s her partner, Aban Fasad, who is an Iraqi investigator struggling with his faith and life under military occupation. Still, he has a good soul and balances Dana perfectly. And, finally, we have Decker Marce, the head of security for the aforementioned private military company. Decker has one twisted philosophy on war, justice, and occupation. He’s not to be trifled with.

Stephanie Shamblin Gray: This book is the same team as “Curse” including co-writing duties. Tell us about working collaboratively with this team.

Tim Daniel: Burning Fields has almost the same creative configuration as Curse, with the exception being Colin Lorimer is handling all of the art duties this time around, and Riley Rossmo – as busy as he is, is contributing covers. We also welcome Joana Lafuente on colors with Jim Campbell returning for letters. So little has changed in the creative lineup, but the the tone of Burning Fields differs from Curse so it feels as if we’re doing it all over again for the first time. That’s a positive challenge in that it keeps things fresh, on edge a bit. We seem to be challenging ourselves at every stage with a bit more rigor than we did in Curse. As a member of this team for both books, it’s easy to evaluate each contributor and see what it means to be a professional – how each person understands their role as a storyteller. I don’t want to say I take that high level of professionalism for granted but it sure is confidence building to know each and every person is going to bring something to Burning Fields that accentuates the reading experience.

Stephanie Shamblin Gray: What inspired you to write a military-style horror story?

Michael Moreci: You know, when you look at the past ten years in the Middle East, thanks to endless war, squabble for oil, and contentious politics, make the leap to a horror story doesn’t require all that much. These are real people dealing with real challenges (to say the least); horror tends to lend itself to stories that have a real emotional core, at least to me.

But more so than anything, I’ve always had issues with private military companies. I think they’re the hideous face of our country’s model of war for profit, and there’s nothing good to be said about them. That’s where Burning Fields was born, in my desire to say something of value about this ruthless companies and the terrible things that they do.

Tim Daniel: Mike did lead the charge with this concept and as he states, once you journey down the Middle East road a bit and take in some of the information available about the endless conflict, particularly in Kirkuk, Iraq, where Burning Fields is set, you don’t really have to work hard to imagine something “horrific” – it already is unimaginable. One of the more interesting questions Burning Fields raises is, what makes this place so damned volatile?  The obvious answer of course is oil, but our research led us to delve into the ancient mythology of the region.

Stephanie Shamblin Gray: As always, horror fans like the blood and guts. What can our readers expect in terms of gore?

Michael Moreci: There’s some, but not much. Tim and I share an identical philosophy when it comes to graphic depictions of blood and guts in comics, and we tend to side on utilizing that method of horror as little as possible. You know, I read this great article recently about the difference between horror and terror. Horror delivers the kind of scares the burrow deep under your skin– that get inside of you and resonate. It’s more psychological in that it preys on your fears and weaknesses. Terror is anticipation, waiting for someone to jump out around a corner, or for the killer to get his/her next victim. Tim and I–as evidenced in our previous book, Curse–are horror writers. We’re going after the chills that haunt you for days after, those that stick with you even when you might not want it to.

Tim Daniel: This is the most violent and gory thing I’ve ever done…but that’s relative right? As Mike said, both he and I are in strong agreement that the horror (and gore) should never exist for its own sake. We’re not making Burning Fields so we can deliver eight issues of nothing but severed limbs and disemboweled victims…wait – is that a spoiler? We strive to put character first, then layer in the horror keeping in mind that we really want to give readers a visceral thrill and Colin something hopefully fresh and unique to create. Specific to Burning Fields, we’ve got a serial killer running loose – one that’s very fond of removing certain body parts from the victims while leaving a very distinctive marks behind on the bodies…

Stephanie Shamblin Gray: With a tight team like this, you’ve got to have some pretty funny production horror stories of your own. Can you share one with us?

Michael Moreci: Haha, well, there’s always the clash of egos, and we’re all guilty of it. We all want our vision to be respected and executed, but that can’t happen when visions don’t align perfectly (and they never do). I can’t think of anything specific, just your run-of-the-mill heads butting over what’s essentially nothing.

Tim Daniel: Mike is deliberately holding back! My favorite “horror story” thus far concerns Mike writing in WHAM! references into the script. Our Boom editorials- Eric Harburn and Chris Rosa never knew what hit them and the note came back something like, ” We’re not sure Wake Me Up (Before You Go-Go) is appropriate for this moment…let’s strike that.”

Otherwise, the challenge is making sure all the creative voices are balanced and that we’re all rowing in the same direction. There’s some serious storytelling talent in Colin & Riley and we all want to make our contributions felt. If you factor in the editors, Joana on colors and Jim on letters and there’s upwards of eight immediate contributors working this series. Somewhere along the line you’re bound to have to address certain concerns and iron-out unexpected creative wrinkles. That’s just part of the process. The key to success is to remain focused on what matters most – the story.

Stephanie Shamblin Gray: Where can our readers go for more information on the book?

Michael Moreci: Boom’s website is pretty up to date and gives some solid information:
http://www.boom-studios.com/series/title?series_id=1412&name=Burning%20Fields

Stephanie Shamblin Gray: Anything else you would like to say about Burning Fields?

Tim Daniel:  If you’ve read Enormous, Hoax Hunters, Roche Limit or Skinned you’ll know that Mike and I have tried both individually and together to establish a strong baseline of titles which combine entertaining concepts with rich characters facing complex challenges. Burning Fields is no exception and if you enjoyed Curse, then Burning Fields is twice as long at 8 issues with a more expansive setting and cast.

Stephanie Shamblin Gray: Thanks for your time, guys! Best of luck with this book.