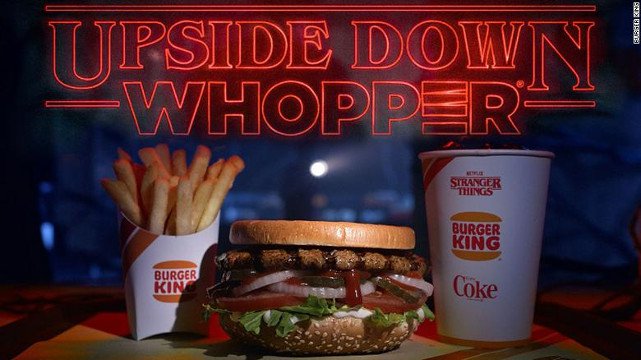 The limited-edition burger will hit the following cities on June 21: Miami, Houston, Boston, Atlanta, Philadelphia, Dallas, Chicago, San Francisco, Los Angeles, and New York.  There will only be eleven locations in total (get it?) featuring the burger (which in any reality is just a traditional Whopper served upside down, so just in case you can’t get to one of these locations, you can replicate the Hawkins National Laboratory experiment on your own with a simple flip).

Earlier this month, Baskin-Robbins introduced a number of ice cream creations inspired by Stranger Things and Coke was the first out of the gate with a limited relaunch of their monumental New Coke disaster (available only on a retro website inspired by the 8 bit video game graphics of the same era).