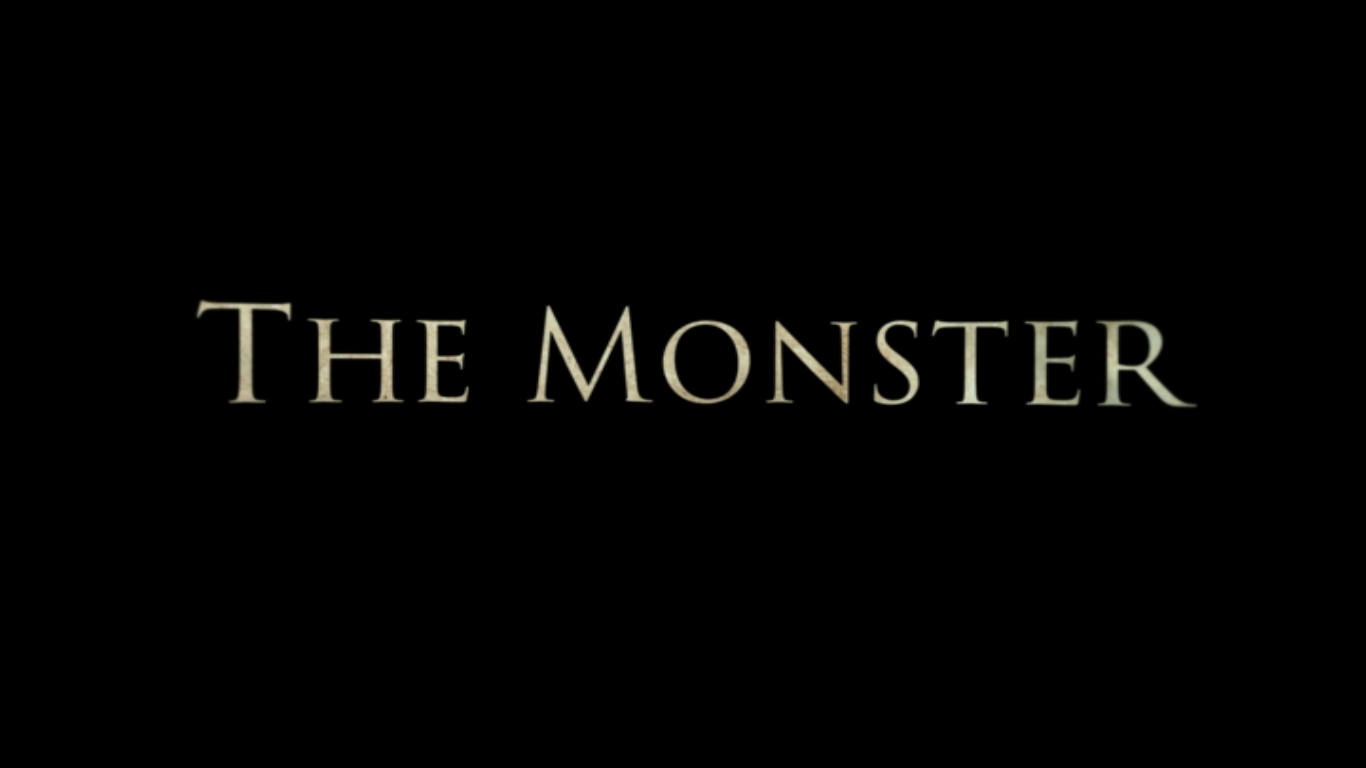 Given A24’s recent string of high quality horror releases and writer/director Bryan Bertino’s track record of horror success with The Strangers, expectations for The Monster were sky high by the time the first trailer for the film was released. The Monster never received a wide theatrical release, a potential warning sign for new horror films. It made its home video release this week, published on DVD and Blu-Ray by Lionsgate. While the film is sometimes inconsistent in meeting its storytelling goals, the work contains some of Bertino’s trademark directorial qualities which elevate the film from basic horror fare. This movie has heart, and its unique characters might help horror fans to overlook some of its flaws. 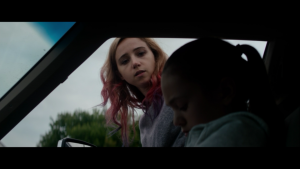 The Monster follows Kathy, played by Zoe Kazan, and her daughter Lizzy, played by Ella Ballentine, as they take an overnight trip to deliver Lizzy to what may become a new permanent residence with her father. Things turn horrific when their car strikes… something… on a long dark stretch of road on this rainy night. The remainder of the film increases suspense and ramps up the level of carnage as a tow truck and ambulance (carrying more food for the monster) show up to help the stranded ladies.

Old school horror fans will be happy to know that The Monster largely employs in camera effects to present its titular creature. Several moments have more in common with John Carpenter’s The Thing than any current horror releases. Sometimes this works well. Other times it appears that a little more editing could have been done to satisfy viewers while keeping the monster mysterious. As we all know: sometimes it’s more about what you don’t show… and a couple of extra seconds here and there sometimes actually cheapened the appearance of the beast.

Besides the creature itself, Bertino uses the environment to heighten this horror story. Remember all of those rows and rows of slender trees in The Strangers? Remember how they increased the sense of isolation by obstructing the view and hiding the attackers in plain sight? Well, they’re back for The Monster, and this time they’re completely surrounding the protagonists! In addition, the rain is almost blinding at times, further disorienting the characters and the viewer. Visually, the film is very dark overall, and Bertino uses the shadows to highlight his characters and dull our senses to the outside environment. Sometimes this method was effective, while other times I simply couldn’t see enough to know what was going on. 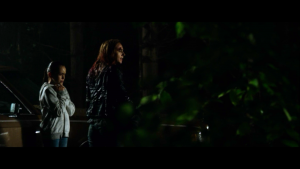 Bryan Bertino began studying multi-dimensional characters with The Strangers, and he’s pushed the way he deals with characters much further in The Monster. While The Strangers hinted at the fact that its main characters were going through numerous interpersonal problems (which became exacerbated by the horrific premise of the film), Bertino chooses to make Kathy’s and Lizzy’s relationship the main focal point of this film. The creature of the movie takes a metaphorical backseat to the development and exploration of the characters’ inner demons and flawed family system as they sit in the car and hash out their next moves. In fact, some of the imagery related to the monster sometimes reflects the tone and development of the mother-daughter relationship. I could have sworn that there were early moments in the film where the car-struck wolf visibly resembled Lizzy’s stuffed animal. This method of storytelling certainly isn’t a bad thing, but this kind of concept has been more effective in other films.

To say that Kathy’s and Lizzy’s mother-daughter relationship is strained would be putting it lightly. The film diverges from the main action of the story to occasionally flash back to some of their nastiest moments together. Kazan’s Kathy is a young and immature mother who seems to make every parenting mistake in the book; while Ballentine’s Lizzy is the “older and wiser beyond her years” young girl who endures various forms of abuse as she copes with her mother’s shortcomings and addictions. Some of these early scenes are sad and emotionally draining, while others simply cause the viewer to wonder why Lizzy didn’t demand to live with her father much earlier. 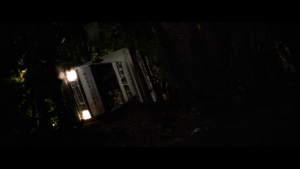 Zoe Kazan delivers a strong performance throughout. Her character is highly unlikeable, and it works because Kazan does such a convincing job of pulling off Kathy’s intentional and unintentional parenting faux pas. However, the young Ella Ballentine is the real star of the show here. Dealing with material that is sophisticated beyond her years, Ballentine delivers a moving and nuanced performance throughout the film. The dichotomy of Lizzy’s strength and perseverance coupled with her clinging to her musical stuffed animal dog- one of the only indicators of her being allowed a somewhat typical childhood- is a constant reminder to the viewer of the injustice in the cards she’s been dealt in life.

For all of its tenderness, The Monster doesn’t pull any punches with the blows it intends to deliver. I was satisfied by its bittersweet ending, and I felt that Bertino remained true to the characters by having Kathy’s plan fail and forcing Lizzy to pick up the pieces. Kathy’s lifetime of screwing things up are oddly reflected in her flawed decisions in the final moments of the film. This is Lizzy’s movie, and Lizzy needs to be the one to finish it. By the time this whole bloody affair is over, we know who she is and we have a good idea how she’s going to move forward. 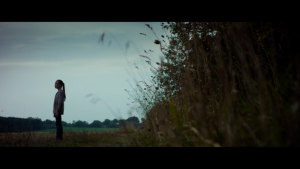 The Monster is an enjoyable, but flawed movie. It’s half of a relationship movie and half of a monster movie… but neither half works on its own. Around the time The Strangers was released, there was a story going around that Bertino didn’t want his killers to wear masks but the studio insisted. I always felt since then that had they been allowed to go mask-less, the movie would have hit a higher level of horrific realism. Bertino seems to be most interested in exploring the depths to which real people can sink, and the added flair of an underdeveloped horror trope runs the risk of becoming a distraction to telling that kind of story. Given the lackluster development and presentation of this film’s beast, I almost wonder what The Monster would have looked like had the creature simply been a bear, or another threat that’s of our planet. At least then Bertino would have been able to give himself permission to solely focus on what he seems most interested in exploring: his characters.

In my preview of January Blu-Ray releases, I recommended that readers rent The Monster before deciding if they want it in their permanent collections. After having viewed the film, I stand behind this recommendation. Fans of The Strangers will be interested to see this progression of Bertino’s filmography, and fans of a good old fashioned monster movie will likely leave satisfied.