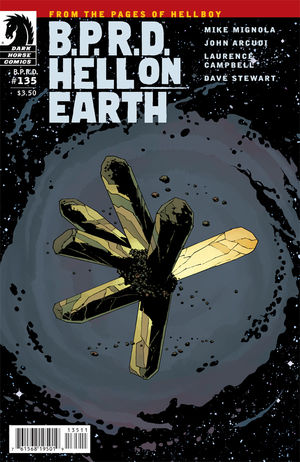 Synopsis:  Loose ends are tied up and new horrors await as the final arc of Hell on Earth begins.

Our Thoughts:  This issue serves as both dessert and an appetizer for long time fans.  Over the past few years, Mignola and Arcudi have established an extinction level threat while also grounding their stories in intimate human drama, focusing on a wide variety of characters along the way.  We are teased with Johann’s new powerful form, Fenix’s terrible vision of destruction, and Howards literally “picking up the pieces”.  Every other major character reaches a conclusion or new beginning in this latest issue as well and it leaves the reader wanting more.  Much is promised and if this issue is any indication, the payoff will be well worth it.

Laurence Campbell’s artwork is again a highlight as he is able to capture the personalities of each individual member of the team.  He is equally proficient illustrating the enormous monsters that are invariably featured in this series.