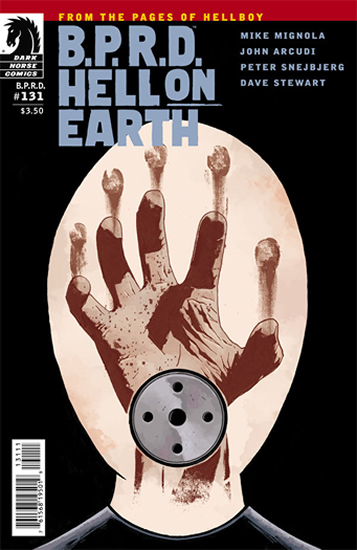 Synopsis:  Kate Corrigan debriefs the BPRD agents after Johann Krauss’ disappearance to learn the truth about a motel massacre in a town in Kansas.   Johann struggles with his existence as a spirit in a world of men.

Our Thoughts:  BPRD is one of the longest running and most consistent horror comics on the market and issue 131 is no exception.  The fact that a horror comic (let alone any comic) can run for this length of time in today’s marketplace is a testament to the universe that Mignola and Arcudi have built through this series and Hellboy.  Because of the previous work done in world building, smaller, more intimate stories like this one have a chance to reach readers.  Spirit-in-a-containment suit Johann Strauss has always been one of the more interesting members of the group, but in this storyline, he takes center stage.   The writers set up a typical moral dilemma found in most horror fiction and survival stories, but then add the inquisitive nature of a character that is not impacted by the concerns of his fleshy cohorts.

The art by Peter Snejbjerg adds realism to the story through his understated work.  He is the type of artists who can easily convey the emotions of his human characters and yet capture the best zombie artwork of other contemporary greats when the time is right.

If you enjoy well written, character-driven horror fiction, pick this title up or hunt up some of the many collections featuring this veteran team of writers and artist.