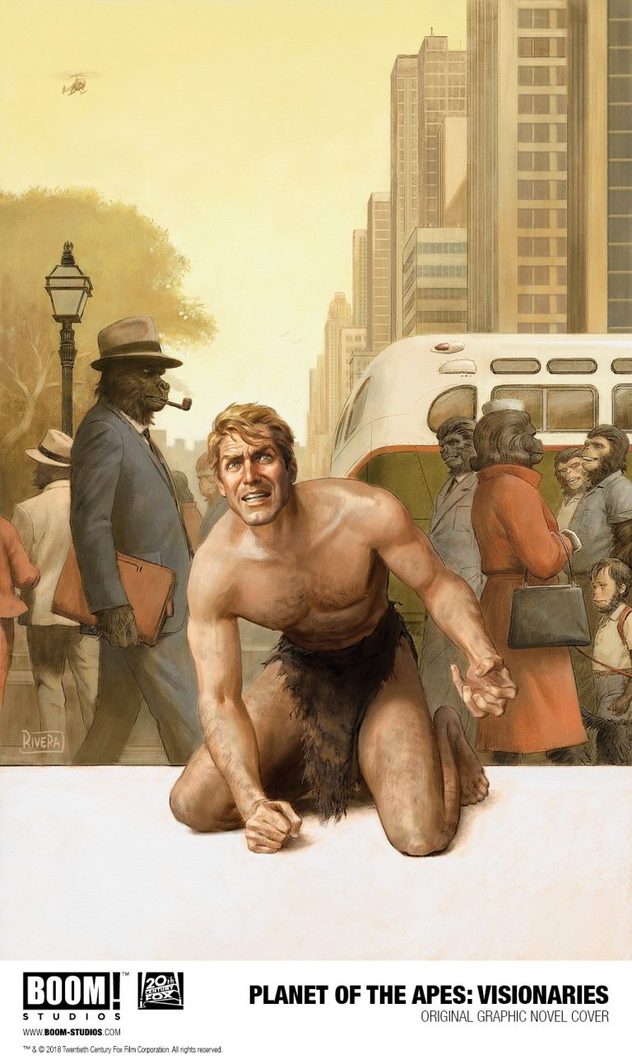 BOOM! Studios in association with 20th Century Fox Consumer Products have announced that they will be releasing an original graphic novel titled Planet of the Apes: Visionaries. The book, which is set to release in August, adapts Rod Serling’s original screenplay of the 1968 film Planet of the Apes into comic book format.

Planet of the Apes: Visionaries will show a much different take on the “Ape” world than what was seen in the movie franchise. In Serling’s version, apes are imagined in a modern world complete with skyscrapers, cars, televisions and a vibrant culture.

BOOM! Studios has proven themselves an apt publisher of the Planet of the Apes books as they have churned out numerous mini-series since obtaining the license in 2011.  The most recent comic based on the legendary franchise is a crossover with King Kong titled Kong on the Planet of the Apes.

Planet of the Apes: Visionaries will be adapted by Dana Gould with art by Chad Lewis.  “Planet Of The Apes meant as much to me growing up as baseball means to most kids. No lie,” said Dana Gould. “That I’m now able to be involved with this universe in a creative capacity, much less adapting the original Rod Serling script… I mean, Rod Serling! I am incredibly grateful to BOOM! Studios for this once in a lifetime opportunity.”

Keep it locked to Horror News Network for more news on Planet of the Apes: Visionaries as it becomes available.

Marvel’s ‘Planet Of The Apes’ Comics To Debut In April