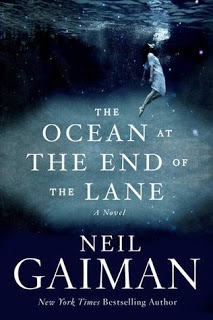 Book Review – The Ocean at the End of the Lane

Synopsis: Sussex, England. A middle-aged man returns to his childhood home to attend a funeral. Although the house he lived in is long gone, he is drawn to the farm at the end of the road, where, when he was seven, he encountered a most remarkable girl, Lettie Hempstock, and her mother and grandmother. He hasn't thought of Lettie in decades, and yet as he sits by the pond (a pond that she'd claimed was an ocean) behind the ramshackle old farmhouse, the unremembered past comes flooding back. And it is a past too strange, too frightening, too dangerous to have happened to anyone, let alone a small boy.

Forty years earlier, a man committed suicide in a stolen car at this farm at the end of the road. Like a fuse on a firework, his death lit a touchpaper and resonated in unimaginable ways. The darkness was unleashed, something scary and thoroughly incomprehensible to a little boy. And Lettie—magical, comforting, wise beyond her years—promised to protect him, no matter what.

Our thoughts: This book does not need a lengthy review, so I'll keep it short and sweet. "The Ocean at the End of the Lane" is not necessarily a horror novel in the conventional sense, but I found the complete and utter sadness of the 7-year-old boy in this book to hold my attention and rip apart the idea of idyllic childhood. I think many of us growing up in the 60s, 70s, and 80s remember that feeling of being more a nuisance to our parents than a joy and wonder. Many of us can relate to not feeling good enough, not being heard, simply being in the way.

This is the real horror, the one that grips you as a kid, though you may not recognize it at the time. It's only years later, as an adult, that it continues to haunt you, leaving an empty space in your soul.

The book itself is one of the most beautifully crafted novels written in my opinion, but I am a biased Gaiman fan. He captured me long ago with Sandman and held my heart forever with "American Gods" (which I highly recommend to, well, anyone). It's a short read, less than 200 pages, and I consumed it in just a few hours. And yet, it's held me and haunted me in the days and weeks since I had the pleasure of picking it up.

I've read lots of reviews discussing Gaiman's use of the Maiden/Mother/Crone trinity for the story, but I'm not going to get into that. Yes, it's there. To me though, the essence of the horror is the idea of the magic being truly real. What if, as a child of 7, you visited a land not of this earth, and you accidentally pulled something back into your own world that's not meant to be there? What would you do? Who would you run to for help when most adults, your parents included, don't want to hear what you have to say? What if the monsters under your bed exist?

Who do you trust?