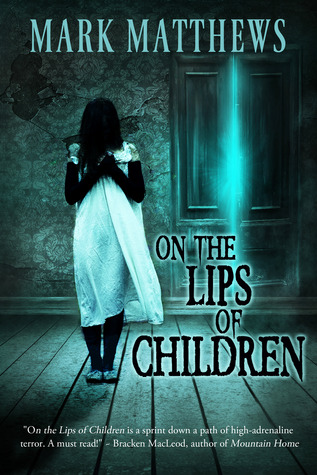 Book Review – On The Lips Of Children

If Mark Matthews goal was to make sure I was completely terrified to take a walk or jog or step out of the house with my kid or even take a shower behind what should be a locked door, mission accomplished.

Matthews contacted The Big Bad Wolf a few weeks ago and specifically asked for me to read his book and write a review (I'm assuming the tattoos may have had something to do with that). The next day, John Taff also contacted me, asking if I'd like to read this book about this tattooed couple who are marathon runners and also have a kid. He said I'd be perfect to review it.

It's nice to be wanted.

Of course I said yes. A little flattery goes a long way with this girl.

The book starts off slow, gently picking up the pace until the reader is jogging at a nice, steady run. I fully believe the running metaphor here is completely intentional on the writer's part, and I found it clever. Though I'm more of a few-miler walker as opposed to runner, I totally got it. And I think it worked (though I will also say that the story itself would work well as part of a series of short stories about running, tattoos, or parenting… even all three).

The running coupled well with Erin and Macon (the protagonists of the story) being heavily inked, as both bring a certain adrenaline rush into play. And although I've never been a cutter, I suppose I can see a former one seeking a replacement for the release it brings in the form of a tattoo gun scratching across skin. As a tattooed mommy myself, I've never been attracted to the pain. It's always been about the art for me, so I wasn't able to relate on that level. Still, it's plausible.

And while the idea of this tattooed couple lured me into reading the book, I will fully admit I was trepidatious about getting to the thick of the plot. The blurb fully outlines that these people get kidnapped with their kid while they're out jogging. As a mother, this scared the freaking hell out of me. I wasn't sure I'd be able to get through it. Even more, it's mentioned at the very beginning of the book that their daughter, Lyric, is 6-years-old. Well, shit. I have a 6-year-old girl, too. I almost gave up. Sometimes that too-close-to-home thing gets the better of me.

But I stuck through it. And as the pace really started to pick up, I was racing to finish it. I had to know how it ended. I was rooting for Erin with everything I had in me. And even though I really didn't care for Macon, I was rooting for him too. C'mon, man. Show you're worthy of these two amazing females you've been blessed to have in your life. Don't punk out now. Do it. Be the man you want to be.

The marathon metaphor of finishing at your best and showing your worth is heard throughout the story. That's Macon's goal. His character is a bit sketchy, and it kind of bummed me out he kept secrets from Erin. As I used to say as a kid (and even as an adult), "Secrets don't make friends." Regardless of the love someone claims they have for another human being, a heavy secret can outweigh that. I think that was the one thing in the story that left me on a sour note.

Erin, on the other hand, was intriguing and full of life, regardless of her loss and keeping people at arm's length. I just got her. Matthews wrote some very interesting and strong females in this novel. Major kudos to him for it. Also, because of the name and the description of her physique, I pictured Erin Ryder from Destination Truth through my entire read of the book. Heh heh. Erin can totally kick your ass.

The antagonists, Dante, Lupita, and T & Q, are all well developed and scary as all get out. I don't want to spoil too much, but it's shown early on that Lupita will do anything, ANYTHING, to keep her children safe, even when she's obviously gone bat-shit crazy. In the end I don't know who's scarier… tweaked out Dante, loco Lupita, or Q & T (there ain't nothing "cutey" about these two). It's difficult to make a reader repulsed by children. Matthews manages to do that.

In the end, ON THE LIPS OF CHILDREN was one of the scariest novels I've read this year, simply because it could so easily happen. And that's why I've suddenly started going to the gym again instead of walking my neighborhood and now triple-checking the locks on my doors all hours of the day and night. Thanks for the neuroses, Mark! Appreciate it.