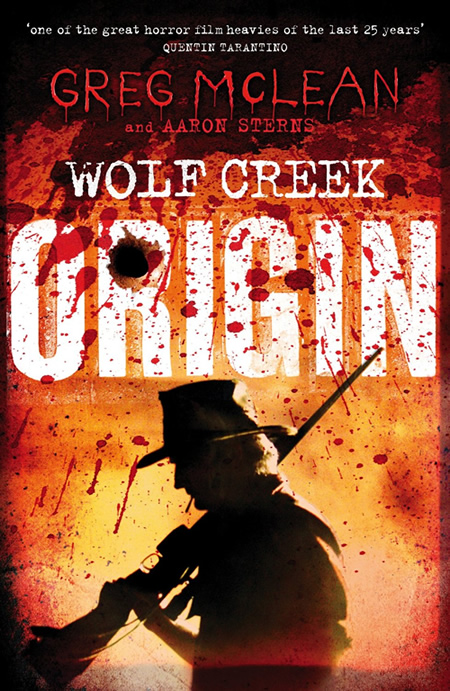 Synopsis: The wide open outback offers plenty of space for someone to hide. Or to hide a body.

When wiry youngster Mick Taylor starts as a jackaroo at a remote Western Australian sheep station, he tries to keep his head down among the rough company of the farmhands. But he can’t keep the devils inside him hidden for long.

It turns out he’s not the only one with the killer impulse – and the other psychopaths don’t appreciate competition. Is Cutter, the station’s surly shooter, on to him? And what are the cops really up to as they follow the trail of the dead?

In the first of a blood-soaked series of Wolf Creek prequel novels, the cult film’s writer/director Greg Mclean and horror writer Aaron Sterns take us back to the beginning, when Mick was a scrawny boy, the only witness to the grisly death of his little sister. Origin provides an unforgettably bloody answer to the question of nature vs nurture. What made Mick Taylor Australian horror’s most terrifying psycho killer?

Our Thoughts: I have not seen the film Wolf Creek, so I went into this reading of a prequel with zero information on Mick Taylor. I even went so far as to not read the back cover blurb just so the story would be fresh and raw, unraveling the further I dove into the novel. I had no idea what this story was about… which made it even better.

Spoilers! I read the first 72 pages of this book thinking Mick was a victim, not a serial killer. For real! How clever and amazing on the part of the writers is that for those who know nothing of the movie they made in 2005? I think it’s genius. Why? Well, because for the rest of the novel, I felt myself rooting for a fucking psychopathic killer. How often can a writer do that and actually get away with it?

Origin is the first in a series of novels written to delve more into how and why Mick Taylor becomes a monster. Within its pages, you will find more gore than you can shake a stick at. You will be repulsed and yet enraptured by this sordid tale of this boy/man and his journey to crazytown. And yes, you will find yourself hoping Mick will come out triumphant in the end.

And what’s better than one serial killer? A whole fucking bunch of serial killers! And they’re all whack jobs in their own special ways. Even the “protagonist” is grossed out by some of these guys. I love it.

The second book in this series, Desolation Game, follows Mick as he fights in the Vietnam War. What better place for a killer to hide, right? In plain sight. Look for my review on book two in the coming months. For now, pick up Origin. Excellent read.