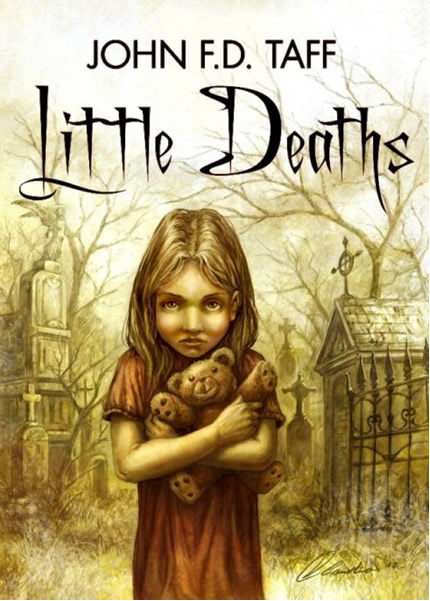 How about the one where a guy resurrects his dead girlfriend with a set of the prop neck bolts used on Boris Karloff in the 1932 classic Frankenstein? Or one where the ghost of the author’s dead dog keeps coming back to entice him into death so they can be together? Or the one where a guy loves candy… to death?

Taff has the kind of nightmares no one really wants. But it’s nightmares like these that give him plenty of ideas to explore; ideas that he’s turned into the short stories he shares in this new collection Little Deaths.

Little Deaths features 19 pieces of short horror fiction; some have appeared previously in print elsewhere, others appear for the first time here. All of them are chilling, weird looks at the human condition from a decidedly dark perspective.

Little Deaths is Taff’s first published book though you’d never believe that once you start reading it. Given, he’s been writing for about 20 years now, so it’s not like he’s a novice to the art of words. I’m simply surprised this is the first book he’s had published.

The book kicks off with “Bolts”, the story mentioned in the synopsis about a dude that brings his girlfriend back to life with a set of movie prop bolts. That right there is pure, classic horror gold. Next comes “Calendar Girl”, which will make you never look at a date book the same way again. You think you have your life loosely planned out? The main character, Josh, takes that planning very seriously. In “But for a Momentâ€¦ Motionless”, we find the story of the final word of God. It is a sad and painful, tender-to-the-touch kind of story. It is also beautiful in its sheer horror, fascinating in its annihilation. It was also one of my favorite stories of the bunch.

“The Water Bearer” was also one of my top 5 in this collection. Story within a story, this is the tale of a pond, what appears to be a sentient pond at that. This pond, she’s like a woman, enticing, voluptuous, in which one taste has you coming back for more. She’s also a mystery, and she can get jealous and angry quite easily. In “The Closed Eyes of a Dead World”, we have a Lovecraftian-esque tale about windows and doors. It’s the kind of story you do not want to read right before you go house shopping.

“Snapback” is written in the vein of a Ray Bradbury story. It’s entirely written in email communiques between military project heads and scientists. It’s terrifying and completely believable in my opinion, which will make the reader nervous and anxious. You read it, and the “this could really happen” tug of an idea keeps nagging at you. Good stuff. If you’re afraid of spiders, do not read “The Mire of Human Veins”. Then again, you’re reading a collection of horror short stories to be scared, right? Then have at it. This one kept me up the night I read it.

“The Scent” has a very horror noir feel to it, filled with tweed suits and beaver felt fedoras, city streets of brick buildings and back alleyways tacky with newly fallen rain. The story played out in my mind in black and white with a quiet symphony of music dancing in the background, rising to a crescendo at just the right moment, the dawning of an epiphany as to the familiarity of a particular scent the main character has been following.

For some reason “Child of Dirt” reminds me of that creepy X-Files episode “Home” about the incestuous family. It creeped me the hell out. Naturally, I thought it was excellent. “Orifice” is the only story about which I’m on the fence. Being a heavily tattooed chick, something just didn’t feel right about it. For me, it was a miss. That doesn’t mean you won’t like it. I still say to give it a shot.

“Helping Hands” reminds me of some of Stephen King’s short stories, particularly “N”. It’s written after the fact, after the deed has been done, in the form of a patient speaking to a psychiatrist (King is not the first writer to do so in this fashion; he’s just who comes to mind). It’s very well written and highly engaging. And it freaks you out. “In Men, Black” is the story of a very special suit. It’s a smash up of “Men In Black” and The Mothman Mythos. Yes, really. “Darkness, Upon the Void” is one of the more disturbing stories of the lot, very well executed in my opinion. What happens when a man who was previously filled with God’s love, who heard God’s voice, who carried out God’s Will, suddenly loses it all, finds it replaced with other voices? The horror that ensues is heartbreaking and graphic.

“Sharp Edges” follows a week in the life of an OCD serial killer. ‘Nuff said. “The Laquered Box” is one of the first short stories Taff ever wrote. It’s got the feel of the classic horror story, set around Halloween, centered around the death of a magician. The cast of characters of four neighborhood boys, a widow who felt her husband sucked at his lifelong career, and the magician himself make for a delicious little tale of mystery involving a special trunk.

“Here” is my very favorite story in the collection. Like Taff explains in the Notes section at the end of the book, you’re either a dog lover or you’re not. There’s really no in-between. And like Taff, I am also a late blooming dog-lover, being on Team Feline for most of my life. This story kicked me in the gut. I cried through most of it. After I read it, I wanted to jump on Twitter and tell John how sorry I was for his loss. Is it a horror story? For me, it is.

“The Tontine” tells the new vampires of the last 10-15 years to go fuck themselves. I dig that. “The Mellified Man” is a good lesson in keeping addictions at bay. I also wanted to puke when I read a mellified man is a real thing when I got to the notes section. Gag. I almost lost my breakfast this morning, John. Job well done.

It all ends with “Box of Rocks”. This one was a little difficult for me to read, being close to someone who was abused as a child by his mother’s significant other. I couldn’t help but imagine him as the boy in this story (which means once again, John did his job well). I’m still not sure how I was supposed to feel by the end of it? Was that Taff’s point? Is the story supposed to make me feel uncomfortable because I wanted to comfort this boy, now a man? Is the whole point of the story exactly that, to see how each individual reader reacts to it, and what his thoughts are on that reaction? Whoa, my brain just exploded.

When I finished the collection this morning, I sat in the quiet of my kitchen for a moment. I sipped my coffee. And then I pulled out my laptop to see if John’s new book, The Bell Witch, has been released yet because I need more. Nope, not yet. Be on the lookout for it, Dear Reader. And in the meantime, pick up Little Deaths to tide you over. And drop John a line on Twitter if you’re so inclined @johnfdtaff. He’s friendly, and he doesn’t bite. You can keep up on his blog at http://johnfdtaff.com/ too.