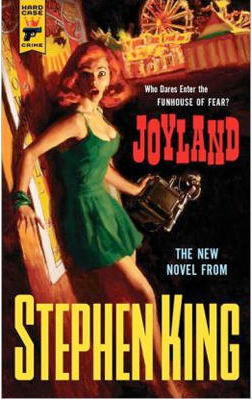 Synopsis: After realizing his romantic life is not going in the direction he’d hoped, Devin Jones decides to take a summer job at an amusement park. There he makes friends with Tom Kennedy and Erin Cook, also summer hires at Joyland, which years before had been the scene of the murder of a young woman named Linda Gray whose ghost is said to be seen at the Horror House. He also befriends a young boy, named Mike Ross and his mother, Annie. Their lives all become entwined when Devin decides to investigate the mystery of Linda Gray’s unsolved murder by the “Carny Killer.”

Our Thoughts: Stephen King is known for scaring the pants off of readers. It’s his thing. He enjoys grossing us out and giving us nightmares. With Joyland, we get something a little different.

There is a murder. There is a ghost. And there is clairvoyance. And the setting is perfect for a good, scary time with whirling rides and dark, eerie tunnels within the Horror House. Here we have all the makings of a good King novel.

We also have a well fleshed out main character in Devin. He wears his heart on his sleeve, and he’s just an all around good guy. King does these characters well. Always has. Think Stu Redman, Eddie Dean, and Jack Sawyer. They’re not perfect, but you can’t not like them.

It’s a coming-of-age story, something that’s also part of King’s claim to fame. Look at The Dark Tower series, The Talisman (co-written with Peter Straub), They Body, and The Long Walk (under pseudonym Richard Bachman) just to name a few.

All these things, in addition to just some really excellent prose, rolled into one make Joyland one of King’s best works in a while. This is Prime King.

There’s not a lot of gore. There’s not a crazy amount of supernatural. There are no croquet mallets, tennis rackets, or can openers here (if you don’t know, you probably don’t want to know). What we do have is a broken heart, a mystery, new friendships, and “wearing the fur”. And while those things don’t normally add up to the makings of a good horror novel, it works here.

If you pick up Joyland and enjoy it (which I hope you will), I suggest reading The Colorado Kid as well. It’s another King novel published by Hard Case Crime in 2005. Let me know what you think of both of them. Happy reading.