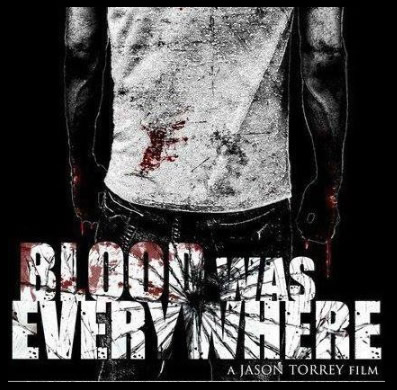 HNN contributor, Lynn Sorel had a chance to check out the recently released indy flick, ‘Blood Was Everywhere’. Read her thoughts below.

Synopsis: The nightmare of the random, unsolved murder is brought to life. A killer wreaks havoc on the lives of average people in a small Massachusetts town. It’s your neighbors. It’s your friends. It’s your family. It’s YOU.

Our Thoughts: Though there is a good degree of murder, Blood Was Everywhere is an indie slasher flick that doesn’t quite live up to its title. There was nowhere near the amount of blood I would expect from a film with this title. It’s has a lot of drama for being billed as a gorefest, but it’s not without its charm, and it does accomplish its goal of showing a truly random, unsolved murder.

It starts off strong, with a man bludgeoned to death by and unseen assailant while trying to change a tire, within the first five minutes of the film. Then we are introduced to the people of the small town of Uxbridge, Massachusetts, going about their daily routines. First we meet Kyle, who living with girlfriend Angela, and her stoner brother Kevin. Kevin begs Kyle to give him a ride to his drug dealer’s place on his way to work so he can buy some weed, which he reluctantly agrees to. While he’s waiting in the car, the killer appears out of nowhere and stabs Jack in the neck with a knife, killing him, and within minutes the killer is driving off with the dead bodies of Jack and Kevin the back of Jack’s Jeep. While all of this is going on, we are also introduced to the dysfunctional Unger family, whose son is mowing the lawn after his father badger’s him into doing it.

As the story goes on, the film jumps back and forth between families. While there is a whole lot of character development and drama, the small talk slows down the pace of the film quite a bit. The next victim on the list is the entire Unger family. The killer is shown hiding in their bathroom, proceeding to kill them one by one. This time the culprit uses an ax and we still don’t get a good look at him. All of the kills are filmed so that you can’t see his face at all, and seem to be inspired by old school slasher flicks, much like Friday the 13th part 1.

The film does a good job of intertwining the stories of all of the townsfolk, despite feeling like it was jumping around. The kills are quite understated, unlike a lot of other flicks, with no build up or scary music to highlight them. The attacks are shocking by the mere fact that they are so sudden, during periods of mundane chatter. There’s a lot of character development for people who are just going to be killed off, however it kept me interested in the people and where the story was going to take them. The talking dragged on too much for me, and many of the kills are not filmed close enough because they are so intent on not showing the face of the killer. For the most part, the acting left much to be desired, though I felt Ashely Arnold, who played Angela, had the strongest performance of the film. Nonetheless, it’s an amusing film for an indie gory horror flick, which at times I found it enjoyable.