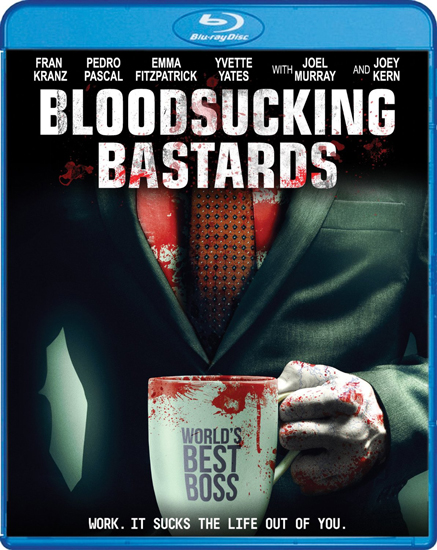 Synopsis: An Office Space meets Shaun of the Dead action-packed vampire comedy, Bloodsucking Bastards stars Fran Kranz as Evan Sanders, a dutiful and overworked employee stuck at a soul-killing corporation with his beautiful co-worker and girlfriend Amanda (Emma Fitzpatrick) and his slacker best friend Tim (Joey Kern). Evan’s world begins to crumble when Amanda dumps him and his boss Ted (Joel Murray) hands his coveted promotion to his nemesis Max (Pedro Pascal). When his office mates start going through disturbing changes and bodies begin to pile up, Evan must find a way to stop the evil brewing amidst the cubicles and water coolers, win back Amanda, and rescue his workplace pals before his life and career go from dead-end… To just dead.

Our Thoughts: Bloodsucking Bastards is a surprisingly refreshing and original horror comedy. Horror comedies can be hit or miss and I often don’t know what to expect, however this film definitely lived up to its description to “Office Space meets Shaun of the Dead.”

After Evan’s would-be job was given to an old enemy of his, Max, his co-workers start either being killed or “changed” in disturbing ways. After they realize what is going on, Evan teams up with Tim, his best friend, and Frank, security guard, to fight back.

Fran Kranz is equally as excellent as Evan, as he was in Cabin in the Woods. Pedro Pascal (Game of Thrones) is menacingly comical as evil new boss Max. Joey Kern, best known to horror fans for his role in Cabin Fever, was absolutely hysterical as Evan’s best   friend,  Tim.