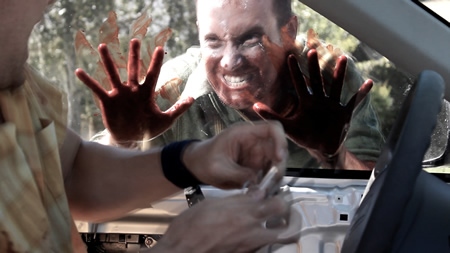 Brain Damage films is set to unleash Blood Rush on DVD and VOD in North America on March 4, 2014. Availability will include all major and minor Cable/Satellite VOD operators as well as major internet platforms including iTunes, Amazon Instant Video, Google Play, Vudu, Xbox Video and more. DVD bonus features will include an audio commentary track and a featurette about the film’s premiere with Q&A.

When a small town is overcome with a blood lust the local witch doctor is thought to be the source. What they don’t know is that he has a different agenda. Five friends fight for their lives when there seems no escaping from the town and the virus that follows them. One by one the sickness tries to take hold of them and no-one knows who is infected and who is safe.