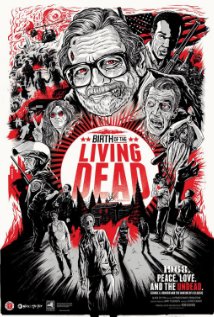 Birth of the Living Dead Review

In the late 1960s, the United States witnessed a major cultural upheaval unlike any other.  This period gave us the civil rights movement, Vietnam, Woodstock…..the list goes on and on.  Amidst this revolution, cinema was also seeing its foundation being shaken as directors took more and more risks to test boundaries and entertain their ever-evolving audiences.  In 1968, a young upstart director in Pittsburgh and his closest friends set out to make a horror film that would go so over-the-top that it changed the genre forever.  With the end result, the classic Night of the Living Dead, it’s safe to say that the mission was accomplished.  This is the premise for the documentary Birth of the Living Dead, directed by Rob Kuhns.  And much like the zombie masterpiece itself, it’s a timely and worthy production that will satisfy both horror aficionados and relative newbies alike.

As we creep up on the 45th anniversary of Night’s theatrical release, Birth of the Living Dead did a superb job of rounding up an impressive collection of independent filmmakers and authors who offer up their universal love for George A. Romero.  Of course, the interview segments with the man himself, which are plentiful, provide the viewer with the most relevant and interesting insight.  Birth chronicles Romero’s start working on set for everything from Mr. Roger’s Neighborhood to local beer commercials.  However, it was in his attempt to write an original screenplay that the movie world would be forever changed.  As documented in this film, Romero recounts how he and his buddies used the counter-culture and civil rights movements as motivation when making a movie that they wanted to be “as ballsy a horror film as we could make.”  “The dead are coming back to life…..THAT’S the revolution…..that’s what people are missing,” Romero says.  Truly badass.

The production involved guerrilla filmmaking at its finest, we find out.  With his trademark humor and insight, Romero talks about partner Jack Russo (known to hardcore fans as the man that stole the “Living Dead” term from George and would later put out the 30th anniversary edition with horrific and unnecessary added scenes) who doubled as a co-screenwriter and a zombie.  In fact, both Russo and Bill Hinzman (the graveyard, or “original”, zombie) volunteered to be set on fire for the film!  Everyone involved stepped up because they all bought in on the concept, and what Romero and Co. were trying to do.  There are quite a few gems that are uncovered during the Romero interview, including the Sherriff (a local steelworker) ad-libbing all of his lines, the use of real cow intestines and livers for gore, etc.  Perhaps the greatest revelation is in the film’s name itself.  Originally titled “Night of the Flesh Eaters,” the name was changed upon wide re-distribution but without the copyright symbol attached.  This small error would end up costing Image 10, Romero’s tiny production studio, all of the royalties as the movie became public domain.

Kuhns does a great job of inter-splicing modern day fans and intellectuals with their thoughts on the powerful impact that Night made.  He includes a profile on a middle-school teacher in the Bronx, who teaches his students “literacy through film” by viewing and studying Night of the Living Dead.  Where was this class when I was in middle school?  Through Romero’s words, Kuhns explores the race angle of the film, which, despite the hectic cultural scene,  appears to be more accidental than intentional.  Lead actor Duane Jones, who portrays Ben, was cast simply because he was the best actor for the part.  None of the characters in the film reacts to Ben for being black, and he’s portrayed as Barbara’s savior….a uniquely utopian concept.  Romero contends that they all thought they were hip by not changing the script due to Jones being black, but in hindsight the feel they may have made a big mistake by not exploiting the racial angle.  Kuhns doesn’t miss a beat here, as his collection of interviewees adding their thoughts on the film and the man represent a wide array of races and cultures.  It’s a fitting homage to Romero, who truly brought different cultures together in making this seminal film.  Good narration along with interesting animated stills serving as segues between topics round out the many positives that this documentary puts forth.

Of course, Kuhns also delves into the perception that Night also mirrors the hopelessness and futility of the social reform being called for during this turbulent time.  Multiple contributors point to the victors and “saviors” at the end of the film are exactly the kind of people you’re included to root against.  The climax, particularly the very end, seems to be a symbolic lynching of the good people in the world.  As the discussion and theories about the film’s rising action and ultimate conclusion go on, there’s much more speculation about motives and intent but very little input from Romero himself.  This seems to be an unintentional, but unfortunate, tactic by Kuhns.  However, he does redeem this single flaw by interviewing a few people that saw Night of the Living Dead as kids at afternoon matinees (where the file was originally offered), and the profound affect being blindsided by this unexpected gore-fest of a film had on their lives.  Very well done.

The odds were stacked against George Romero and his buddies ever getting their labor of love distributed by a studio.  The early negative reviews, low budget (just $114,000), black and white cinematography, and the fact that the horror genre was flat at the time were all working against them, but they persevered.  The result was a ground-breaking movie, one that truly embodied the turbulent times and unsteady social landscape of America in the late ‘60s.  Birth of the Living Dead does an excellent job of reiterating the importance and modern relevance of this film, and Rob Kuhns successfully forces us all to remember that while the zombie genre is hot, it’s all due to one film and one very modest bespectacled director from New York City.