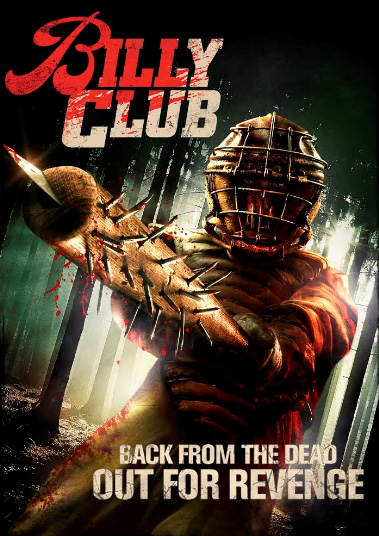 Uncork’d Entertainment will be bringing the baseball slasher, Billy Club to DVD and VOD November 4th.

The movie is described as:
Fifteen years after a gruesome triple homicide devastated their Little League baseball team, four friends reunite to commemorate their dead coach and fallen teammates. A mystery unfolds as the secrets from their past return to haunt them and a vengeful killer, hidden by an antique umpire’s mask, returns to even the score.

From the Press Release:
After 3 long years of writing, funding, shooting, editing, coloring, sound design, festival screenings and finding distribution we are very proud to announce Billy Club will be officially released on DVD and VOD November 4th 2014 through our North American distribution company Uncork’d Entertainment.

We have had an exciting run with the film including a collaboration with key art design team Dog & Pony that brought us 3 award winning posters. Over the past year we have screened and recieved several festival awards including “Best Feature” at the Hollywood Horror Fest, “Best Wisconsin Feature” at The Beloit Int’l Film Festival and “Best Horror Feature” at the International Horror and Sci-Fi Film Festival. We will also be showcased at the 2014 American Film Market and available for international sales through our sales agents at Empress Road Pictures.