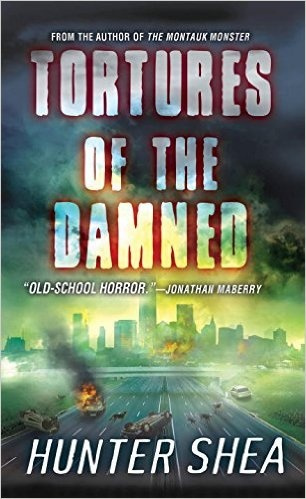 This past year, I was very lucky to be able to talk live with so many brilliant and creative personalities on my weekly horror radio show, THE HORROR HAPPENS RADIO SHOW. I wanted to pay tribute to a group of specific books and authors that I connected with. Minds and dark spirits that took horror down new twisted paths, brought us on personal journeys, and really sparked something in listeners of their conversations.

This list contains books that were part of the show in 2015 including subjects of discussions, reviews, and/or the focus of guest conversations on the show live. These seven books made an impact on many levels and with many people! Check them out and enjoy the dark corners of horror literature.  Happy reading and enjoy some of my favorite horror books of this past year…

(Titles are in Alphabetical order except for #1)

1. Hunter Shea – Tortures of the Damned (Favorite Horror Book of the Year)

My favorite horror book of 2015 was Hunter Shea’s TORTURES OF THE DAMNED. The apocalypse is based on a viral attack throughout several boroughs of New York City. Taking the city from a personal perspective, Shea created the timeline and framework of the story in mostly micro chapters. Each chapter would focus on the linear timeline and events during this terrible ordeal. Once the attack begins, as the panic and the poison sets in, the lives of many are changed in one way or another. Never believing anyone or anything is truly safe, Shea takes you on journey into hell with the reader coming to grips that each breath, each step and each moment you are in terrible danger from multiple threats. Not just danger from the chemicals, you have the human monsters, animals, nature and the environment around you in a variety of predators. With tremendous description (including a variety of animals that take a terrifying), powerful sequences involving attacks/kills by multiple predators, incredible and compelling character development as well as evolution. Infused with shock moments, gore and an ending that rips your heart out, this book will leave you speechless. Tense, invoking, emotional and dark all encompass the world gone to hell in TORTURES OF THE DAMNED!

I have been very lucky to have conversations with Jack Ketchum over the years. He was my first recorded chat on the Horror Happens Radio Show and he said to me that the chat made him think about things he had not before. Take the time to read CLOSING TIME. Coming from one of the most creative and clever writers in modern horror literature, Ketchum shows you some of the many roads he has traveled in this collection (novellas and short stories). A lover of cats, brown liquor, New York City, politics (not the Bush family) and much more, Ketchum regales the reader with 19 tales that read like worn, black and white photos capturing moments you want to know about. With Ketchum’s ability to harness humor, reality and the normalcy of horror makes each story as rich and is smooth as Johnny Walker. Following each tale, Ketchum includes personal insight tying it up in a blended macabre bow of wit, influence and reflection. Also, let’s not forget the signature horror style and care. Ketchum gives a 101 on framing each story and the flow that makes this book read with no stopping. Ketchum’s skill to write quality characters and cultivate dialogue from any number of moments or situations never makes the reader feel out of place. CLOSING TIME has something for everyone no matter your level of horror or how they connect to your life.

3.  Alyse Wax – Curious Goods: Behind the Scenes of the ‘Friday the 13th’ TV Series

Taking me back to my younger days, Alyse Wax joins this list for the very detailed, well-constructed, thoroughly researched comprehensive companion called CURIOUS GOODS. An obsessed fan forever of the FRIDAY THE 13TH television series (1987-1990), Wax has been building to this grand achievement watching way too much TV as well as discussing horror television in a very successful career to date. It took Wax great care and time to break down all the episodes during the three season run that focused on the weaving of cursed objects, developed characters, smart horror writing and powerful storytelling. For those who did not follow the show, CURIOUS GOODS was a precursor to some of the best horror television on today and this book honors that creation. Also, one of my favorite shows growing up. Wax presents the significance of this show with the extensive interviews, understanding of the behind the scenes, focus on cast, crew, producers and more. Offering full synopsis, the overview of the cursed item and commentary from Wax herself, it was one of the most informative and fun reads of the year!

It amazes me how many authors don’t tap more into the horror of getting older and what happens when the elderly become a group of human monsters? From personal experience, growing older effects so many people, can be very scary and is such an emotional topic. Lucky for you, Adam Cesare continues his disturbing writing with MERCY HOUSE. Bringing a primal evolution to his characters and settings, Cesare develops a story that traps you in overwhelming foundation of grit and gore to the dark side of the elderly. Feeling like you need multiple showers, Cesare offers and amps up the dynamics of sociology, sexuality and mental illness, all surrounding the story of an old age home that goes through a frightening transformation with its residents, staff and visitors. A love letter, in my opinion to Jack Ketchum’s OFFSEASON and OFFSPRING, MERCY HOUSE is the book (from page one) that hunts you and makes you truly afraid of what goes bump in the darkness.

Gross… awkward… weird… No these don’t describe me growing up! These impactful words are just the tip of the macabre iceberg in Shane McKenzie’s coming of age terror tale entitled PUS JUNKIES. Crafted from both personal and high school experiences along with the love of many things horror, McKenzie tells a story about a high schooler “Kip” who is bullied due to the worst acme possible. Finding that his acne is psychically connected to his emotions, Kip becomes a drug for his high school class harnessing the pheromones and zit juice into a combo that can change people, turn their wills and make them do anything (I mean anything) for a fix. Beyond the very impactful (and gross) detail on multiple fronts, PUS JUNKIES is an insane and endearing life story and lessons dealing with responsibility, adolescence, change, sexuality and addiction. A rather quick read with connecting characters, powerful decisions and challenging situations, McKenzie shows that growing up and high school can be hell with revenge just bubbling under the surface. PUS JUNKIES is a fulfilling fantasy, young adult story trapped in the dark world of horror.

Crafted in the dark corners, dusty towns and forgotten idols of Hollywood, Mick Garris’ SALOME is a fast, quality read about a marriage that becomes murder and the husband that needs to know why someone would kill her. Written with a noir base and a horror underbelly, Garris brings intelligence and the understanding of Hollywood that we come to expect from this master producer, director and writer in his projects. SALOME tells the story of young love and the reality of not only the pressure of Hollywood relevance but how love can fade into bitterness, betrayal and mystery. Offering the very captivating perspectives of both the husband and the wife, SALOME is infused with a blend of dark humor and just enough gore to offset the noir sensibilities. Whether you have ever loved and lost, had thoughts on the darker side or are just a fan of mysterious, SALOME is the book for you to heat up those cold nights.

Insects are creepy. I know for some people they are too much to bear on any level, even a mention gives shakes and uneasy visuals. John Everson’s VIOLET EYES is able to harness that fear in both a predatory as well as a scientific level. Basing the story and conflict on an experiment involving a fly/spider hybrid insect that has nested on an island in the Florida Keys, VIOLET EYES is a tale of nature gone mad harkening back and influenced by the great monster films of the 1950’s. The story is based around a survivor who escapes an attack and the murder of his three friends, only to bring the horror of engineered nature to the mainland and an unsuspecting town. Laced with realistic emotion and descriptive horror that puts the viewer in a variety of connecting predicaments as well as squirm moments, VIOLET EYES’s intense predatory scenes match some of the most visceral insect attacks caught on tape. All of his main characters have flaws and depth that help define them against the backdrop of nature gone wild. Potent, creepy and smart… John Everson’s VIOLET EYES will have your paranoia at high alert and scratching all over.

Head over to Http://horrorhappens.com to find these conversations plus many more each guests’ chats and archived show via your smart phone, mobile device & laptop!