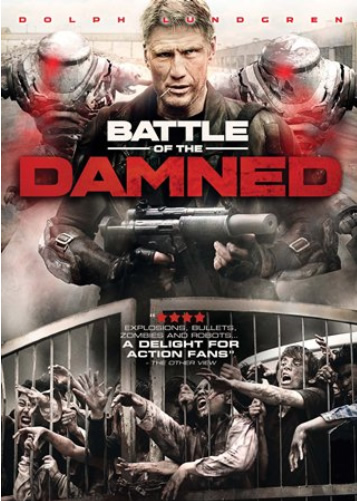 Battle of the Damned Coming to DVD/Blu-Ray February 18th

“Zombies. Killer Robots. Nice town you got here.” Anchor Bay Films presents Battle of the Damned, where you can pick your apocalypse – germ warfare, zombie assaults, and/or deadly robots!!   With unrelenting action and unyielding suspense, Battle of the Damned commences February 18, 2014 on Blu-ray™ and DVD, with an SRP of $29.99 for the Blu-ray™ and $24.98 for the DVD.  Pre-book is January 22, 2014.

When a deadly virus is accidentally released into a major city, its population is quarantined by military blockade. And for a wealthy industrialist desperate to rescue his daughter from inside the rabid chaos, his only hope is former commando Max Gatling (Lundgren). Now Gatling has one day to bust in, blast through hordes of the undead, find the girl, and hunt for a way to get them both out alive. But will a small band of survivors and an army of killer robots turn his mission into maximum slaughter? Matt Doran (The Matrix) and David Field (Chopper) co-star in this intense action shocker that TheActionElite.com calls “awesome badass…one of the craziest movies of Dolph’s career and arguably one of his best!”

Also starring Esteban Cueto (Fast Five, Iron Man 2, The Scorpion King), Battle of the Damned   is a terrifying look into the future.  Set against a ravaged landscape, it is a battle against flesh and steel – a battle between outlaw and outbreak!

Battle of the Damned is written and directed by Christopher Hatton and produced by Ehud Bleiberg, Leon Tong and Hatton.