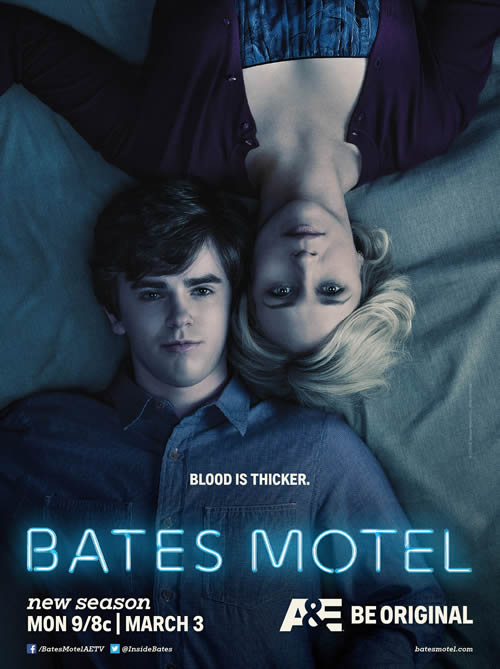 In season two of “Bates Motel,” executive producers Carlton Cuse (“Lost”) and Kerry Ehrin (“Friday Night Lights”) dig deeper into the twisted world of the Bates family. Picking up from last season, Norman (Freddie Highmore) is fixating on Miss Watson’s death while Norma’s mysterious past starts to haunt the family with the introduction of her brother. Meanwhile, Norman’s brother Dylan, (Max Thieriot), gets more entrenched in the familial drug war that fuels White Pine Bay and finds himself right in the middle of the danger as Bradley (Nicola Peltz), who remains on the hunt to uncover her father’s killer, is driven to precarious extremes. Sheriff Romero (Nestor Carbonell), is caught up on all fronts as everything in town escalates and Emma (Olivia Cooke) complicates her relationship with Norman as the duo explore new love interests, bringing new and old characters along for the ride.

Take a tour of the Bates Motel and learn more about what’s to come in season 2: http://www.batesmotel.com/

The season one premiere of “Bates Motel” garnered 3 million total viewers and 1.6 million adults 25-54 and 18-49, making it the most-watched original drama in the key demos in the network’s history.

In “Bates Motel,” following the tragic death of her husband, Norma Bates buys a motel on the outskirts of the idyllic coastal town of White Pine Bay, seeking a fresh start. As Norma and Norman get ensconced in their new home, they discover this town isn’t quite what it seems, and the locals aren’t so quick to let them in on their secrets. But the Bates’ are done being pushed around and will do whatever it takes to survive – and will do whatever it takes to protect their own secrets.