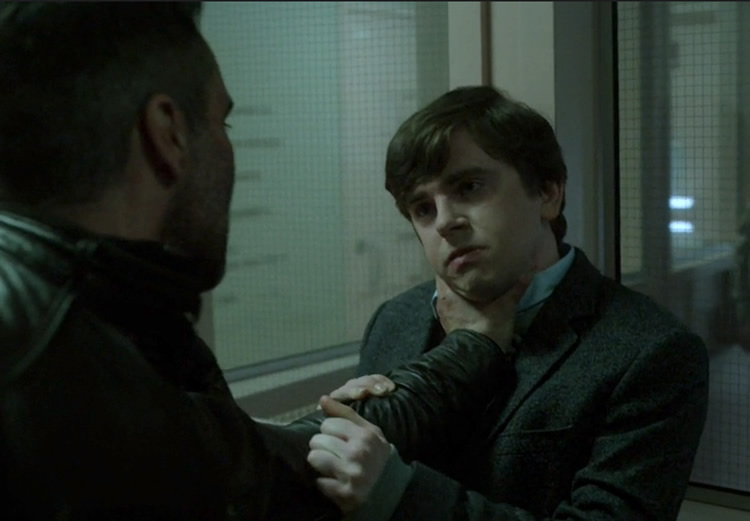 With only one episode to go, we find ourselves moments from the public hearing of Norman Bates, charged with three counts of murder carrying a maximum penalty of death. Amidst the mug shots, fingerprints and a brutally honest meeting with counsel, anyone and everyone who is part of Norman Bates is frozen with fear. “Serial homicides”, “multiple life sentences”, “maximum security prison”, “not guilty by reason of insanity”…these phrases hold more weight than even Norman’s strongest personality can handle. The mother/son/protector morph is once again portrayed as two bodies in one outfit. The change from one personification to the other seems to happen at the flip of a coin although the reflection of Norma in the cell window is once again magnificently orchestrated.

The Bates property is littered with investigators, metal detectors, blacklights and hazmat suits. Audrey DeCody’s suitcase is found in the yard along with Chick’s body atop the typewriter in Norma’s mausoleum. The destruction and disrespect for the home Norma worked so hard to beautify was heartbreaking for this fan. To me, it was yet again another death of our tormented and tempestuous heroine.

Our main character puts up a weak argument about the careless Sheriff questioning without access to medication; sad, old tune which will no longer fly in the face of the state’s strong physical evidence. Attorney Ramos genuinely believes that Norman is insane and wishes to have him evaluated and diagnosed with Dissociative Identity Disorder so she can better help him in his trial. “Norman” barks back deducing that Ramos mustn’t be a mother as she likes to win and “being a mother is an impossible job to win”. Knowing that the odds of getting out of this mess are slim, “Norman” obeys Ramos’ direction and gives simple, polite answers at the hearing.

Emma leaves Katie in the care of her dad and drives down to White Pine Bay. We are all victims of the whiplash as she veers from supporting her husband to crashing into the news of her mother’s murder. Even the peace-love-dope philosophy of the all-forgiving Emma can’t get her past this news. She immediately lets Dylan know that she can’t promise they’ll survive such a tragedy. She sticks around to see to her mother’s cremation and scatters her ashes at a picturesque peak. Not a bad send off for a woman Emma declared a parishioner of “the Church of Herself”. In a bittersweet parallel, she visits Norma’s grave, the woman she felt was more of a mother than her own. (I forgot she just found out about Norma’s death; we’ve been grieving for months now.) Emma’s anger with Norman when she learns of the news is unprecedented for her character; she warns Dylan to not speak of any sympathy for his sweet-but-crazy brother. The soulful Emma slightly resurfaces after saying her goodbyes to both mothers when she stops to visit Norman at the Sheriff’s Department on her way back to Seattle. “Norman” greets her and tries to convince her that he – her friend Norman – wouldn’t kill anyone. Emma sees right through it and asks to speak to the real Norman. “Norman” gives up the façade and lets Emma know that her mother got what she deserved. Emma asks “Norman” to tell her friend that she misses him and takes off. Even “Norma” is affected by this unconditional love as Emma is quickly absorbed into the duality of the mother and son with whom she so deeply bonded. And as we heard her say in last week’s episode, even “Norma” misses Norman.

Dylan is in quite the conundrum. Still feeling drawn to defend his mentally ill brother, Emma makes it clear she cannot support that decision. When Norman’s lawyer shows up at the King’s Motel, Dylan tells her that she’s been paid and needs to keep him and his wife out of it. Attorney Ramos pleads with Dylan to be the human connection Norman needs at his public hearing. In solitude, Dylan swipes through photos on his phone of his mother, his brother, his wife, his daughter. I’m sorry but there should be NO hesitation about this, Dylan. No freaking way are you to defend your brother in court. I don’t care how bad you feel about the way things turned out. Thankfully, Dylan heard me through the TV and walks out of the courtroom after hearing Sheriff Greene dictate the sordid details of the victims from the stand. Unfortunately for him, Madeleine Loomis gets his ear in the lobby. She only had the wool pulled over her eyes for 2 weeks; how could Dylan live with himself knowing what demons lurked inside his brother for years? Daag.

Romero finds himself in Chick’s car in a field contemplating his next move. Low on gas, he stops at a station. A fellow patron gawks on Romero while he searches for the gas cap on the 1968 Ford Fury. Luckily, he just wants to know if it’s a ’68 or a ’69. Phew. Before driving away, Romero catches a glimpse at the front page of “Otter Bay Star” in the newspaper machine: “Owner of Bates Motel arrested for murder”.  Storming back into Maggie’s house, Romero berates her for not telling him about Norma’s arrest and logs onto the White Pine Bay Sheriff’s Department website to find out where Norman is being held. Maggie begs him to run away with her to her family’s cabin in Montana to start new lives with new identities. Sorry, Maggie. Not even your unrequited love can stop Romero’s revenge. Down at the station, Romero rounds up his former coworkers (sadly wounding one) and swaps them in the locked cage for Norman. After nearly strangling Norman with a grin of ecstatic avengement, he drags one of his hostages along to be the driver as he sits tight with Norman in the backseat of the ’68 Fury. Romero’s ultimate vengeance also takes a backseat to the whereabouts of Norma’s body. Lead the way, Norman.

There are strengths to note. Olivia Cooke’s performance as Emma was solid and convincing; both the character and the actress really have grown. Choosing Bobby Darin’s “Call Me Irresponsible” to play during the investigative scouring of the Bates home was one of the best music moments of the series (right up there with “Mr. Sandman” during Norma’s death scene in Season 4).

That being said, I expected more from such a precipice of an episode. I felt much closer to the end (even if I was in denial) watching previous episodes than I do right now. Norman was nonexistent. He was a minor character in the second-to-last hour of his story and I, too, missed him. Maybe this is all a part of Cuse and Ehrin’s evil plan to suck me in then spit me out. Freddie Highmore told EW that the final episode “could be the funniest episode that we’ve ever done at the same time as being the saddest.” (http://ew.com/tv/2017/04/17/bates-motel-series-finale-preview-freddie-highmore/) As much as I am not looking forward to April 24th, I definitely don’t want the funniest episode ever. What could we possibly want to laugh about at this point?