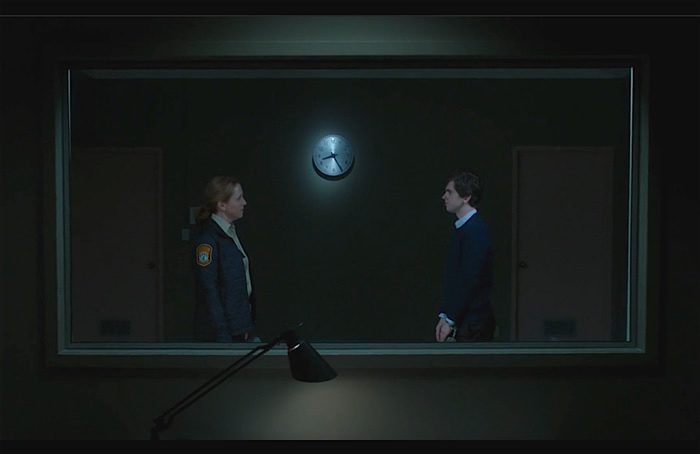 Let’s start by saying that I’m glad my neighbors didn’t call the police. If I heard me scream like that, I totally would have. Luckily, I let loose an equally loud (albeit awkward) laugh just to let anyone listening know that I was okay. If you’re unaware of why I shrieked, read on…

This week’s episode picks up moments after Norman’s frantic 9-1-1 call. Sitting in the front room with Sherriff Greene, he is still lucid. Terrified, but lucid. He begs to be out of that house and on his meds. While in the interrogation room, Norman haphazardly recalls the details of Sam Loomis’ murder. He can’t remember where the well is or why he killed Sam, mimicking a blackout that occurred after the act instead of during. Greene accuses Norman of making it all up to gain attention. In the holding cell, Norman takes his medication. Distraught that his confession is being questioned, he is unable to keep his doppelganger away. She angrily appears and tosses him to the floor. After forcing him to puke up the pills, she cuddles him and soothingly tells him that the world is cruel place undeserving of his kind soul. She then knocks him out cold on the corner of the stainless steel commode to remove him from the situation. At this point, Norman as we know him is gone….at least through the end of this episode. Possibly through the end of this series. And while we’ve grown accustomed to “seeing” Norma as Norman, she is now wearing his clothing, a step toward a deeper merging of both personas. Our views of Norman smoothly transition between the physical forms of male and female – so fluid that Norman’s reflection in the holding cell window has long, blonde hair. For crying out loud, what do I even call this incarnation going forward? How about “Norman”? Sure. Let’s go with that.

Dylan is committed to defending Norman, clearer than ever how crazy his brother is. He hires feisty defense attorney Julia Ramos, a White Pine Bay native with lots of connections. Dylan debriefs her about his separation from his family and the disappearance of his Emma’s mom. He repeatedly insists that Norman is crazy and needs to be institutionalized although he is convinced that deep down his brother is a good, kind person. Convinced, that is, until he learns from Sheriff Greene that the second body found at the bottom of Falls Lake belonged to his dear mother-in-law.

Now in control, “Norman” instantly refuses to cooperate with Sheriff Greene. He demands to be released, as he hasn’t been charged with anything. Provoked by her suspect’s snarky new attitude, Greene fires back with Miranda Rights, arresting Norman Bates for the murder of Sam Loomis. Moving on to Plan B, “Norman” instructs Attorney Ramos to do exactly as he says and steer clear of any mention of insanity. With some subtle suggestion, “Norman” devises his alibi: he lied about murdering Sam to protect the object of his affection and the true killer, Madeleine Loomis. He speaks the truth about his obsession – being undone by Madeleine’s resemblance to his dead mother. He even spills the beans about Sam meeting his mistress at the motel and her tire marks as she hightailed it out of White Pine Bay. “Norman” then embellishes that Madeleine and Sam had quite the scene at the motel before leaving together. When Madeleine supposedly returned that night, she spoke of a dead husband and a body in a well. She kissed him and so he lied to be her scapegoat. Mother always said he was too naïve for beautiful women.

I think I’ve finally figured out Sheriff Greene (with a little help from Dylan). She knows exactly what’s going on and if she doesn’t, she gets her audience to give it up. She blurts stuff out – whether fact or speculation – for the shock value, pauses while she observes the reaction and then decides her next step: accusation or feigned ignorance. It’s brilliant, actually. I found myself keeping a poker face while she asked questions for fear she would break down the 4th wall and call my bluff. She doesn’t pursue Madeleine Loomis; the young widow’s reaction to Norman’s confession seems genuine. And if she caught the way “Norman” stared at Madeleine through the station window…..well, she truly wouldn’t need any more convincing. Poor Madeleine. Stop calling Sam’s phone.

Romero creeps up on a napping Maggie and finds his pistol tucked beneath her throw pillow. He hesitates while she remains asleep but sneaks out because killing his stepson is obviously more important. The Bates Motel is icy and deserted. Romero makes his way up the back hill and is clearly pained both physically and emotionally by the time he makes it inside. He looks like absolute poo. Seeing glowing, gorgeous hallucinations of Norma further prove how far gone he is. Exhausted in every way, he falls asleep on Norma’s bed only to wake to the sound of Norman’s voice. He follows it to the basement and draws his gun as he gets closer to the voice mixed with the pressing of typewriter keys. Looks like Chick snuck back after his run in with the crime scene investigators at the motel that afternoon and set up his writing nook in Norma’s catacomb. At gunpoint (yet unfrazzled), Chick explains how he befriended Norman through their shared bond of loneliness. He also lets Romero in on the news: Norman is not home but in jail after confessing to murder. Oh, and despite his feelings of exploitative guilt, Chick explains how was compelled to craft the sordid story into a scripted drama, finding inspiration in the room where Norman kept his mother’s stolen corpse. Romero’s horror and disbelief are agonizing and Chick just can’t help himself; he gleefully narrates his summary of the whole thing aloud while typing: “More surprise than the brain would allow you to imagine.” In classic Romero style, he shoots Chick in the head, mid-keystroke. Ding. As much as I loved your kooky ass, Chick – you deserved it. It was more surprise than my brain would allow me to imagine, but you asked for it. (And this is where we cue the collective thanks to my neighbors for not unleashing the hounds.)

The duplicity of our main character has reached new levels. In addition to the mixed visualization of both players, we witness the complexity of Norman’s insanity. He physically sabotages himself so that his stronger half can take over. The sheer terror in his eyes right before he completely relinquishes control is astounding. “Norma” always knew how to act in Norman’s best interest until now. So when acting as herself stops working, SHE acts like HIM. While retracting the confession and admitting the infatuation, we see how perfected this possession has become. But even “Norma” misses the real Norman, waiting for the time when it’s safe for him to return. Not that it matters in the end as Sam Loomis’ body is found and Norman Bates is officially charged with the additional murders of Jim Blackwell and Audrey Ellis. Ding.

Freddie Highmore owns this episode. As director, his play on duality is apparent throughout: Emma’s empty half of the park bench followed by Dylan’s empty half of a motel bed; Norman washed in the blue lights of the patrol car next to Dylan’s crimson face; Chick surrounded by warm candlelight while Romero is encased in cold darkness. As actor, I feel this is his best performance to date. His juggling of personas and emotions was beyond stellar. I didn’t know where Freddie Highmore ended and his channeling of Vera Farmiga began. How can this be ending in two weeks?!