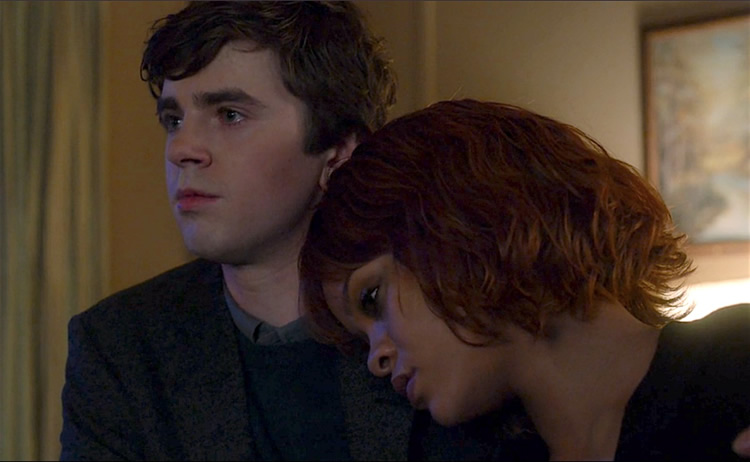 Let’s jump right into the water here. Marion Crane checks into the Bates Motel on her own (as Marie Samuels, that is) with more than enough cash to take care of the debt her lover claims is keeping them from living happily ever after. Marion is understandably disoriented by the crime she just committed. And as if the next steps of her life weren’t dubious enough, she finds herself eating a late night ham sandwich in the Bates Motel office surrounded by stuffed birds. Despite the motel manager’s lascivious stares, Marion is polite and appreciative. She knows she that being in White Pine Bay is one step closer to a hopeful future with her boyfriend. But when Sam finally calls her, she hears a woman yelling in the background and then a dial tone. (Well, not really a dial tone but you get the effect.) Waiting for Sam to call back, Marion decides to take a shower…in Room #1…with Norman watching from the office peephole. Gulp. Just when I have no more nails to bite, the shower curtain is ripped open!…by Marion, who has decided Sam is not going to get away with his lying liar lies. She finds Norman in the office straightening the wall art and flirts her way to Sam’s address. Unfortunately, Norman lets her in on the little secret that Sam has been deceiving both Marion and his wife Madeleine. She doesn’t want to believe the truth but witnesses it for herself as she watches Sam and Madeleine fighting through the front window of their home. Marion introduces a crow bar to Sam’s car windows before speeding back to the motel. She feels foolish and defeated, having been neglected and taken advantage of her whole life. She finds comfort in Norman when he checks in upon her return from the Loomis house. Despite feeling frightened and forsaken, she heeds his advice to start a new life. She hugs Norman, leaves behind everything but the money, and burns rubber – tossing her phone out the window along the way. Adieu, Marion. Don’t forget to write.

We find Emma exactly where we left her last week, sitting at the laptop reading about Norma’s demise. Fortunately, Dylan has someone with such a tender heart to deliver the shocking news. After a good cry, he calls Norman and berates him for not letting him know. Norman precisely recites that he was respecting Dylan’s wishes to move on and be left alone. Dylan reminds Norman that when he reached out from Seattle, it was Norman who insisted on staying out of touch. Dylan is angered by the ridiculousness of it all and does not buy Norman’s claim that Norma also tried to kill him via the faulty furnace. Dylan gets zero answers before getting a lot of dial tone. (Again. Effect. Work with me here.)

Norman was not prepared to meet Marion Crane…and her rain-drenched bosom. His libido shifts into top gear and he compensates with goofy grins, awkward fidgeting and corny banter. Coincidentally, Norma returns home, peering down at Norman as he heads up the stairs to prepare a midnight snack for his guest in Room #1. He dismisses Mother’s judgment and tells her that even though he is insane for carrying on a conversation a person who isn’t really there, the world is full of crazy people who function just fine. (Nice dig at the POTUS, folks.) They volley the ball of real and unreal back and forth with Norman declaring that the only reason Norma showed up again is because an attractive girl just checked into the motel. As an act of self-control, Norman spites Norma and proves he can appropriately visit with a beautiful woman (except for the petting the dead bird part). He proves he can watch her shower through a peephole without running in to stab her a gazillion times. He proves she can rest her teary head on his shoulder without slitting or strangling her throat.

Norman embraces his insanity. He calmly owns every hallucination, every action made while under the hypnotic influence of Norma. He insists that the person he is seeing does not exist. She is not his mother and he scolds her for acting as such. He is convinced that he has never seen things more clearly and we sense some relief in his clarity; he’s crazy but he knows it. Unfortunately, crazy is as crazy does and Norman can only take so much. Refusing to be denied any longer, Norma demolishes the kitchen like a shrieking banshee until Norman finally admits that she is real. Validated, she hugs him and assures him that she’s there to take care of him, not hurt him. This regrettably brings little solace to Norman. In fact, it sets him up for the ultimate come-to-Jesus. Norman reprimands Norma for talking like his mother one last time. It is in that moment that she is no longer his mother. “We are two parts of the same person,” she explains as she details Norman’s creation of her. Too young to protect his sweet mother from his horrible father, Norman invented a partner who could handle the hard stuff for him; fittingly, she was an alternate version of his beloved mom. The time has come for Norman to learn what his mind has done to cope. He must now feel the pain and trauma he was spared during his blackouts. This new Norman is now aware of what he is capable of and can no longer hide behind his alter ego’s possession. This new Norman knows that Sam Loomis has hurt innocent women the way his father hurt his mother. It is apropos that just as Norman reaches this epiphany, Sam comes searching for Marion at the motel.   And just when you thought someone wouldn’t get stabbed a gazillion times in the shower of Room #1….but in this version, Norman asks, “Oh, Mother…what have I done?”

The plot twists in this week’s episode flat-out induced motion sickness. But the fun kind I get riding an inverted, corkscrew roller coaster. From the shower switcheroo to Norma no longer being Norma, writers Carlton Cuse and Kerry Ehrin sharply remind us that we are very close to the end. During her final moments as her own imaginary entity, Norma is able to exhibit all of the personalities we have seen since her death. She short-circuits in and out of personas like the T-1000 falling into a vat of molten steel: the loving, doting mother; the angry, entitled martyr; the irritable, snarky adolescent. With the gloves-off revelation, I fear the only Norma we have left will be the one who injects guilt and vengeance into our Norman. I don’t know if I can handle her talking about Norma/Mother in the third person for the last 4 episodes. And even though the Norma of Season 5 hasn’t been OUR Norma, it still feels like she’s died all over again.

A shout-out to director Phil Abraham for all of the shower homages. Bravo to Cuse and Ehrin for reinventing the murder. I’m a hot mess of a fan right now – swimming in “Psycho” while drowning in “Bates Motel”. If only Chick were around to rescue me….