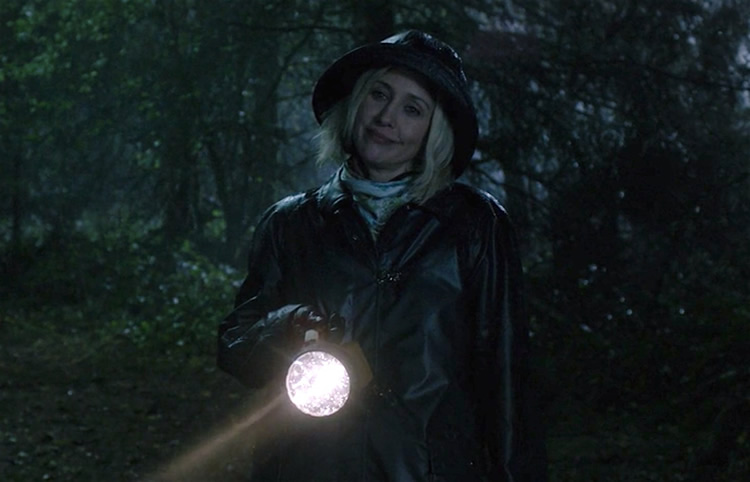 If Driver A is traveling south at a distracted speed while Pedestrian B is running north at an equally distracted speed, and the two collide, how revolting will it be to find that Pedestrian B is dead as a doornail? And so begins Episode 5, with Chick standing over the roadkill of Caleb, confirming what I (unsuccessfully) willed was not going to happen in last week’s review.   I whimper yet part of me is relieved. An already simple and impetuous man, Caleb would not have survived a world without Norma and Dylan. He would have self-imploded – killed or been killed in a short matter of time. Upon being released from the basement, he cried, “I don’t know what to do. I don’t know where to go.” That decision was serendipitously made for him. Godspeed, Calhoun.

Romero proves he’s stronger than a shotgun blast to the gut. He sneaks away from the farm and onto a vacant ambulance filled with the accoutrements necessary to dress his own wounds. Barely able to walk, he is warily taken in by Maggie Summers, sister of the late Keith Summers (#SeriesPremiereRapist). I may have written him off too soon; he schemes like the Romero I once knew.

Did I mention there’s a new sheriff in town? Jane Greene rides a bike to work and is kind and social. (Hmmm. That’s a switch.) She discovers that Alex Romero has escaped custody. She’s also on the look for Romero’s former inmate buddy – Jim Blackwell – who jumped parole…but not before leaving behind a handwritten note that read, “Bates Motel”. Sheriff Greene visits Norman at the house in hopes of putting together pieces of coincidence. Norman has a less than composed reaction to learning that Romero is loose but keeps it together enough to send the sheriff on her way. Until, that is, she returns with Blackwell’s note and asks to see a guest registry. You know….to compare handwriting. Ohmygodohmygodohmygod. I can’t even contain myself over this Hitchcockian parallel. Sheriff Green/Detective Arbogast flipping through the book looking for Jim Blackwell/Marion Crane’s handwriting while Norman/Norman inquisitively looks on…the angle from under his jaw as he chews and swallows?!?! Kudos to Max Thieriot (Dylan Massett) in his directorial debut for this slick homage. Seriously. I passed out for a second there.

Chick has been humbled and steps back a bit from his exploitative zeal. He (and Norma) disagree with Norman on how to properly dispose of Caleb’s body. In addition to being the one driving the manslaughter vehicle, Chick is quick to stress the secrets that would be uncovered if the authorities were involved. He volunteers to get rid of the corpse and in an unexpected and moving turn, Chick sends Caleb off Viking-style, wrapped in white dressings and flora aboard a flaming canoe casket. Chick’s respect and dedication to the ritual is agonizingly beautiful. He returns to the Bates home with a stash of personal belongings, ready to continue his residency but is bluntly and politely turned away by Norman who thinks that the house isn’t big enough for the three of them. Chick is devastated and angry. He’s become quite attached to his role in the home, the warmer roof over his head, (possibly) the continuing storyline of his suspense novel, (definitely) Norma and her hold over Norman. It’s this compassion that compels Chick to agree to help Norman dispose of Jim Blackwell’s car haphazardly hidden in the woods. He cannot turn away from Norman’s open struggle to break free from his maternal delusions.

Norma’s appearances are completely dictated by Norman, more so than we’ve seen so far. Her presence is so owned by Norman that she has evolved into an irritable and indecisive teenager. Vera Farmiga’s lazy vocabulary, poor posture and rolling eyes convert the once commanding Norma into an inadequate contender. As Norman appears to become more mature and disciplined, Norma becomes more childish and irresponsible. What an incredible transformation.

At the end of last week’s episode, we saw Norman do his best to fight off Norma when he set Caleb free. His determination to make his own decisions and do what he thinks is right and normal completely carries this week’s episode. 30 years after first playing Norman Bates on the silver screen, actor Anthony Perkins told The Washington Post, “Norman is, at heart, a benevolent soul with a dark side. But Norman’s conscious mind is always on the positive things in life.” We see hope and honesty in Norman that we have not seen before. He insists on calling the cops when Caleb is killed. He packs up Mother’s old dresses and some trinkets as a first step to purging and starting fresh. He proudly turns away Chick because – let’s face it – who has a kimono-wearing manservant these days? Heck, he even tells Norma that he is sick of getting rid of bodies.

During his efforts to take back his life, the darndest thing happened. Norman killed his mother. He fought with her in the woods while searching for Jim Blackwell’s hidden car and he smothered her to death. He suffocated his dead mother. He consciously and willingly extinguished the persona he perpetuated. Now if that isn’t the ultimate defiance, I don’t know what is. But deep down, we know Norman’s limitations. When dead-dead Norma comes back to life, dead Norma tells him to never do that again. He is shaken and frightened, at both losing his mother (again) and at being driven to kill her (again).

As he gets back on his ‘Road to Independence’ tour bus, Norman is determined to accept and enjoy Madeleine Loomis’ interest. It feels normal. And it feels damned good. His pure joy over her affections is bittersweet; he’s so smitten yet we know what his future holds. He offers her some of Norma’s old dresses – even though he knows it’s creepy to give your dead mother’s clothes to the woman you’re crushing. Unless, of course, you’re crushing because she reminds you of your dead mother. She accepts the gift (?) and later invites him for dinner because she’s bored while her hubby is away. Norman does his platonic best at dinner (after he recovers from Madeleine answering the door in one of Norma’s classic blue and white tank dresses) but succumbs to her advances and hoists her onto the counter for some full-on snogging. But Mother knows just when to show up, even if Norman has kept her at bay this long. Flashes of Norma slashing Madeleine’s throat send Norman running to the car. To my surprise, Norma was not in the backseat waiting to scold. And to Norman’s surprise, she was not home expected to explain herself. And to all of our surprise, Norman finally sees his home for exactly what it is – a cold, filthy dump.

C’mon, Norman. You can do this. You’ve come so far. Deep breaths. That’s it. Breathe deeply. There. You’re calm now. Oh, no….