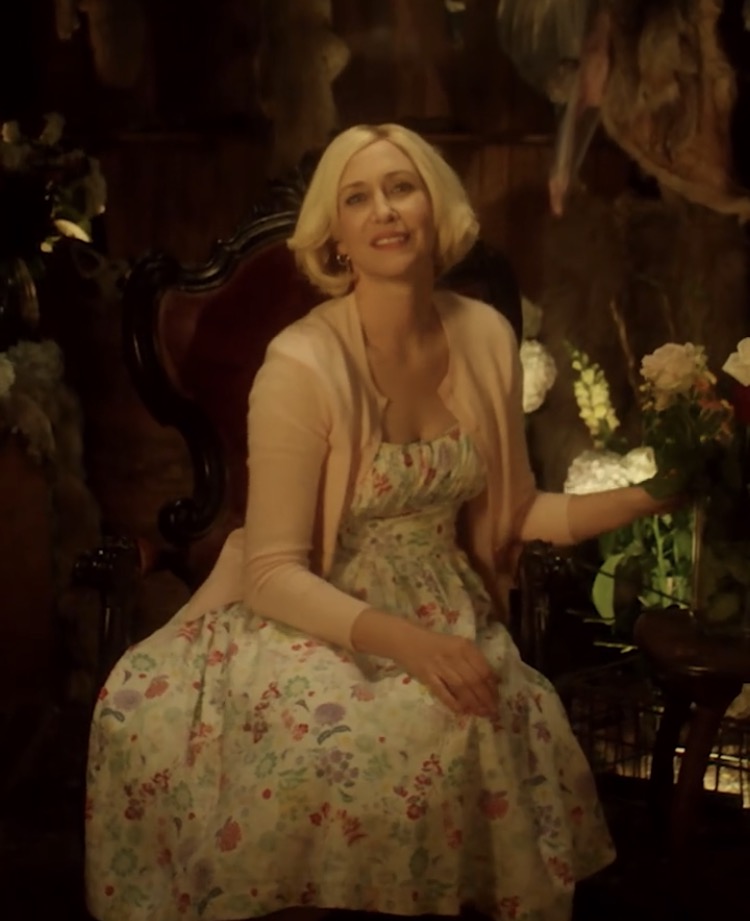 Did you ever get the feeling that you know something you’re not supposed to know?  And then next thing you know, you’re in the thick of it….this secret cosmos you weren’t supposed to know about suddenly and openly playing itself out? So begins Episode Three, breaking down the fourth wall we have hidden behind until this point.

We pick up exactly where we left off with Caleb recovering from his bash upside the head and Norman still in his wig, frock and high heels. (Go, Freddie Highmore for working those pumps better than I ever could.) Our heart crumbles at the sight of Caleb, beaten both physically and mentally, as he regains consciousness handcuffed to a support beam in the basement.  His blow to the noggin allows him to see his sister for a moment until she morphs into his demented nephew.  Before the closing credits, we see the character of Caleb in all his glorious dichotomy. Bound to a pole through the majority of the episode, his physical strength is robbed from him and we are left with a weak, fragile man. He has always been incapable of accepting his relationship with his sister but his love for her is unrivaled. Enraged and unable to negotiate his release, Caleb drifts through dreams and flashbacks that are horribly intertwined with the reality of Norma’s death. Pure anguish personified. Norma-via-Norman visits Caleb and tells him that both her son and her brother are in love with her and therefore, the three of them cannot live happily ever after. This is the final push for Caleb who now no longer sees Norman’s face but that of his adoring sister. He professes his love while holding her hand and goes to a place beyond despair – a place with no sister, no son, no purpose.

Romero’s relocation is approved and during his armed escort, he (of course) escapes and carjacks some sad sack named Jason whom he sets free in a field. Victim of a flat tire (or course), Romero stumbles upon a jalopy behind a barn only to be caught by the shotgun-wielding farmer’s daughter. Although he tries to calm her, she startles easily and shoots him in the gut. Really, Alex? Shot outside a car…again? And while we’re talking, what was your plan? Before you got shot, that is. Run home to kill Norman? I’m pretty positive that a slew of White Pine Bay’s finest would be dispatched to the Bates Motel and soon as word of your escape got out. Oh, never mind. I’ll wait.

In a fascinating mixture of concern, curiosity and self-preservation, Chick has decided to stick around and see what happens. Already caught up in the “family drama”, he offers loyalty and security to Norma-via-Norman and is accepted as a houseguest. Initially Chick seems entranced by Norman’s insanity and appears empathetic to the downward spiral. He promises Norman companionship full of discretion and free of judgment because, after all, “we’re all in this sideshow together and then we die.” There’s something to be said for Chick being surrounded by life (and death) and being needed, trusted, included after the couple of years he’s had. Maybe there’s even some gratification in knowing exactly where Caleb is…and that Norman will probably do the dirty deed for him.  But then there’s his brazen exploitation of this flawed family that has traces of the noxious neighbor we first met in Season Three. He is clearly affected by Caleb’s misery but throws him under the bus once Norman becomes aware of his bondage below. During dinner with Norman and Norma, Chick soaks in the warm walls and hot food and milks the façade further, secretly recording it all on tape.

The dark humor continues as promised and Chick owns most of it. His abrupt reaction to the presence of an invisible Norma is priceless. Pricking up his ears, looking (maybe) in her direction, offering her more curry….marvelous. Pushing pedestrians aside during in his quest for a Hemingway/Chandler/Hammett typewriter is hysterical even though it’s the moment we learn he plans to chronicle the catastrophe he’s witnessing. But recalling dark humor should end on a happy note so I give you Chick’s obsession with Madeleine’s cookies, losing all manners and etiquette to get a mouthful.

Norman confirms his multiple blackouts with Norma who tries to keep the basement hostage a secret. The real Norman is a minor character in this episode yet his moments dominate the storyline. A visit from Madeleine Loomis starts with an apologetic basket of cookies and ends with tears of loneliness and uncertainty about her marriage. Norman composes himself with such compassion and constraint that I almost imagined him un-crazy for a second. He quietly supports her and is soothed by her similarities to his mother. He keeps the truth about her husband to himself and suggests they take a walk in the woods, as friends are known to do. Norman also steals the show when it’s time to obey Mother and shoot Uncle Caleb. Not only does he refrain from pulling the trigger, he lets Caleb free. AND he stays Norman the whole time! That’s my boy! But psychosis goes and psychosis comes and Norma shoots at the heels of a fleeing Caleb, forcing him right into the grill of a car carrying a typewriter, a tape recorder, and a driver who unwittingly may have just got his revenge.

Caleb is so dead! Chick hit him HARD!