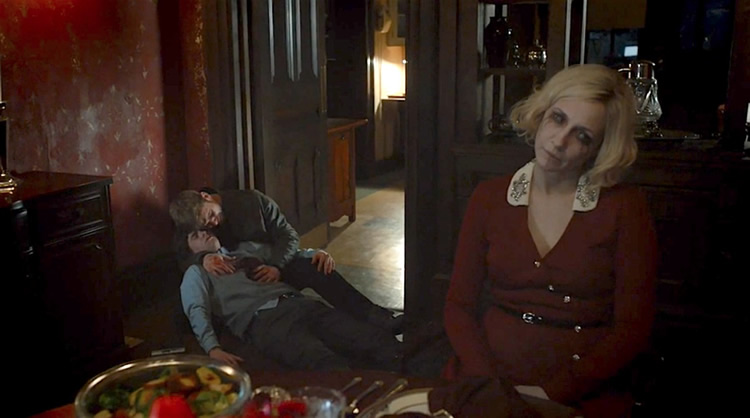 We were promised a true end to this story. And we were rightfully reminded to bring our tissues. What an agonizing list of farewells…

Farewell #1: Alex Romero – Romero finally finds his way to Norma’s makeshift grave after letting his hostage go and heavily coercing “Norman” for directions. His vengeance hits the pause button when he sees her discolored (yet still beautiful) face. Watching the reunion from behind, “Norman” offers his sympathy, which unpauses the anger and summons a vicious beating. Romero returns to the grave, professing his love to Norma and promising her a better burial. In his broken and weepy state, he is an easy target for Norman who bashes him in the skull with a rock. Norman wins the ensuing struggle, gets ahold of Romero’s gun and does not hesitate to shoot twice. While he has not formally avenged his wife’s death, he manages to inflict a fatal wound with his dying words. “You killed your own mother,” he says. “You can’t hide from it.” And with this declaration, Norman is released from the psychological cocoon.

Farewell #2: “Norma” – Now that he is aware of the truth, Norman no longer needs his protector. As he stares at his mother’s corpse (for what seems like the very first time), Norman’s alter ego weakly tells him that Romero is lying. Norman computes that he intended to kill himself as well as his mother to which “Norma” announces it is time for her to leave. He begs her to stay and not leave him alone but he no longer needs protecting now that it’s all out in the open. She says, “Goodbye, Norman,” and peacefully disappears into the forest.

Farewell #3: Reality – The shooting of Romero, the realization that he killed his own mother and the absence of his psychotic security blanket are more than Norman can handle. He drifts into a dream state where Norma is alive in their warm, golden home. When he tells her that he had a horrible dream in which she died, she reminds him that he needs to learn to wake himself from his bad dreams. And he does just that – except the bad dream he removes himself from is realty. He goes back in time to a long-haired Norma telling him they’re moving to Oregon for a brand new start with her widower insurance money. Norman is thrilled. The two of them drive up the coastal highway going back and forth with soft smiles, flirtatious giggles and affectionate teasing. They make it to their new home, bubbling with excitement and hope for what lies ahead. In the reality we see, Norman indeed performs all of these actions but we are morbidly forced to watch the ghastly truth. The car ride? Norma’s corpse leans stiff in the back seat. The rush up to the new house? Norman carries his mother’s dead body up the long, dark staircase. The juxtaposition of Norman’s fresh, innocent face to the bloody, crumpled visage is nearly impossible to process.

Farewell #3: Dylan’s Hope – Dylan loses his mind when Sheriff Greene tells him that Romero has kidnapped Norman and her office manager. He (ridiculously) insists that his brother needs psychological help even though he is suspected of multiple murders. Greene couldn’t care less about Norman’s safety. Dylan acquires a gun from Remo to protect himself, sharing little with his old pal about the series of events. While attempting to drown his sorrows and fend off a bar patron’s advances, Dylan receives a call from his brother. Norman thinks it’s time for them to all be a family again and invites Dylan to the house for dinner so he and Norma can bury the hatchet. When asked if he’s with Romero, Norman flatly replies that he knows no one named Romero. The shock and confusion in Dylan’s expression as he listens to Norman prattle on is insurmountable. He agrees to dinner and from the motel parking lot, he makes a just-in-case call to Emma. Despite her pleas for him to call the sheriff, Dylan promises to never love another and hangs up before heading up the stairs. Norman is so pleased to see Dylan and knows Norma will be, too. From the kitchen, Dylan insists they talk but Norman doesn’t think dinner – or Mother – should wait. With a cheeky nod to the dining room, Dylan slowly makes his way to the chair where Norma sits propped, looking deader than ever. Norman rushes in after Dylan vomits in disbelief, offering to clean it up and dismissing it all as overexcitement.

Farewell #4: Norman – Dylan’s reaction to their mother’s place at the head of the table nudges Norman back into a tiny nook of the here and now. He begs Dylan not to ruin the new replacement fantasy he has created. When Dylan insists he turn himself in, Norman asks him if he wants him to be locked up and medicated with the criminally insane to which Dylan replies with a tirade of things he DOES want but cannot have: a happy, normal brother; a living mother; a wife and daughter who spend Christmases with their uncle and grandmother. Norman tries convincing Dylan that if they believe hard enough, it all can happen. After thinking about his choices and knowing that Dylan won’t budge, Norman takes calculated steps toward his brother with a kitchen knife in his hand. “I can’t let you take me away from her,” he calmly yet tearfully says. “I just want to be with her.” With gun in hand, Dylan takes steps backwards and quietly pleads, “Don’t ask me to do this.” Norman lunges with the knife raised above his head. Dylan pulls the trigger and catches his brother, hugging him to the floor. Norman looks above him at the vision playing in his dying mind of him running through the woods – as both child and adult – into his beaming mother’s open arms. With his last breath, he whispers, “Thank you.”

Farewell #5: “Bates Motel” Cast & Crew – 5 years ago, my admiration for a psychological thriller filmed 10 years before I was born prompted me to tune in to A&E for the ambitious prequel to “Psycho”. In the 50 episodes that ensued, I witnessed an original masterpiece laced with magnificent nods to the 1960 Hitchcock classic; the subtlety and respect for its inspiration carried this series far beyond just any origin story. “Bates Motel” crossed many dimensions from a quaint little town with a booming drug industry to a humbly dressed single mom with a trucker’s mouth. The duality of the show’s characters and themes resulted in a perfect balance of drama and dark humor – reality and fantasy seamlessly intertwining from episode to episode. Aside from the intense performances, glorious sets and brilliant writing lies a story of the power of unconditional love. Amidst the carnage, we became sympathetically attached to these characters riddled with flaws because of that unconditional love: Norma’s love for her son, Dylan’s love for his brother, Caleb’s love for his sister… Even Emma’s unconditional love for mankind saves her marriage in the end.

I don’t know if I could have written Norman’s epitaph. I’m okay that it was left blank for whatever billion reasons that came to be. There’s a sense of relief in all of the farewells, even as I end this Horror News Network assignment. Nighty-night, White Pine Bay. I will dream a little dream of all of you.