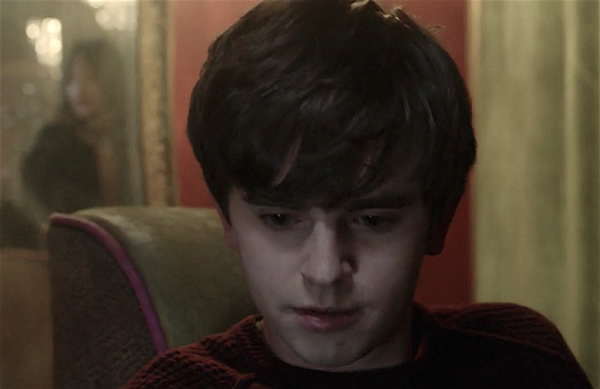 Summary (with SPOILERS): Norman is convinced that now he has told Dr. Edwards his mother is a psychotic killer, he will be released to oversee her affairs.  His disappointment in the doctor’s countermanding leads to a breakout of Pineview with the help of Julian, a rich brat/longtime resident.  The two escapees hitchhike to a strip club where a wad of Julian’s cash gets them into the VIP lounge.  While being seduced, Norman sees visions of his mother killing Blair Watson.  He morphs back and forth into Imaginary Norma, simultaneously scolding and making out with his private dancer.  Adorned with a feather boa, Norman is snapped away from the fantasy when Julian cries for help.  Norman grabs the screwdriver he still possesses from the breakout and runs to Julian’s rescue but finds a bouncer’s fist instead.   Dr. Edwards takes custody of Norman from the paramedics.  Norman is concerned that he blacked out but the doctor assures him that only he and Julian were harmed. Norman is broken and begs for help, promising he will do anything because he doesn’t trust what is real anymore.

Emma tells Dylan that she is going to Seattle where she can receive the best respiratory treatment and start college.  Dylan agrees to go with her when asked.  Emma tells Norma during her visit that she has done the right thing committing Norman and giving herself a break.

Romero’s former lover and forever banker Rebecca contacts him about the money she helped Bob Paris launder. She tells him that she has one key and the man who killed Bob has the other. She implores Romero to get her the 2nd key as they both could use the money. Romero storms off then finds the 2nd key in his private stash of Paris cash.  A DEA agent contacts Romero investigating Bob Paris and questions Rebecca Hamilton’s role in money laundering.  Romero plays dumb about it all.

Norma and Romero leap from first date to honeymoon overnight. She tries to ward off his residual advances but is quickly tickled pink by the whole thing.  (She even tucks her photo of Norman into the top drawer of her dresser while getting ready for a night out with hubby!) The newlyweds dance, flirt and nuzzle at the winter festival and carry the passion back to the house only to discover it ransacked.

Opinion: Strong episode with last week’s storylines taking tantalizing twists and turns. Romero’s denial of knowing anything about Rebecca outside of their banking relationship is going to bite him in the ass. But I AM glad to see his blood money upgraded him from that fancy flip phone! (A glib thanks to Emma for confirming that her love affair with Dylan came out of nowhere.)

“Keeping the Creepy” Score: 0  –  With Norma and Norman apart, my creepy meter is in sleep mode.