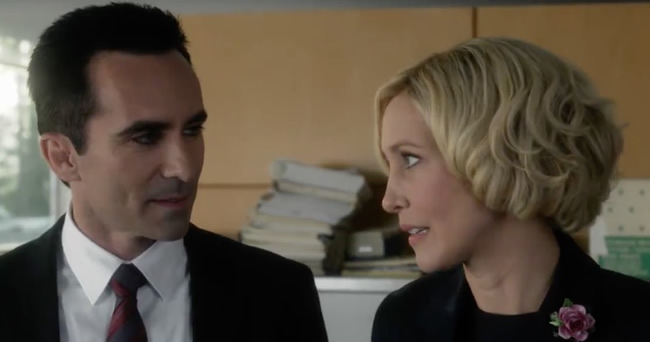 “Til Death Do You Part”

Summary (with SPOILERS): Norma and Alex get married. To her bewilderment, he announces that he’s moving in to avoid suspicion of a fake marriage.  Alex insists on a romantic dinner to save face and the two of them share first date revelations over several glasses of wine. Back at the house, Alex is the perfect gentleman and leaves a tipsy Norma in her own bed for the night.  While at his house packing things, Romero encounters a lover and when she learns he is newly married, she questions her safety having laundered Bob Paris’ money.  Romero eases her mind and then scoops up his cash stash as soon as she leaves and hides it in Norma’s basement.

Alex leaves Norma a honeymoon note that he has hired someone to fill the would-be-pool pit outside the motel.  When she wanders down to check it out, a worker hands her a foreign earring to which she claims to be one of hers that’s been missing.

Norman spends his first hours at the Pineview Institute trying hard to maintain his innocence inside his restless yet paranoid body.  He denies the social advances of Julian, a young man who claims he was admitted because his parents think he’s annoying. Dr. Edwards remains calm and invested during Norman’s cryptic resistance and tries to convince him that he can safely reveal all of his mixed emotions about his mother. The doctor indulges Norma an early visit with her son.  Norman shoots down his mother’s affections and apologies. He declares his fear of her and his disappointment in her abandonment.  Norman later reveals to Dr. Edwards that he believes his mother is an insane murderer.

Dylan tells Emma that he’s going to fire Gunner and leave the pot business only to find Gunner already on his way out to California.  A limping and deformed Neighbor Chuck appears asking Dylan where he might find Caleb.  Dylan tells him that he has no idea where to find his father.  Dylan visits Norma and is relieved to learn that his mother has finally committed his brother.

After being dejected by her Norman, Norma returns home to find comfort in Alex’s arms.  He assures her that she’s done the right thing by sending Norman to Pineview. Norma kisses Alex and when she confirms her intentions, he scoops her up and heads to the bedroom.

Opinion: Definitely a precipice episode – Norman opening a can of worms about his mother; Romero finally getting to hit that… Here’s to hoping that next week’s episode picks up where this one left off.  A solid episode with little excitement as well as little boredom.