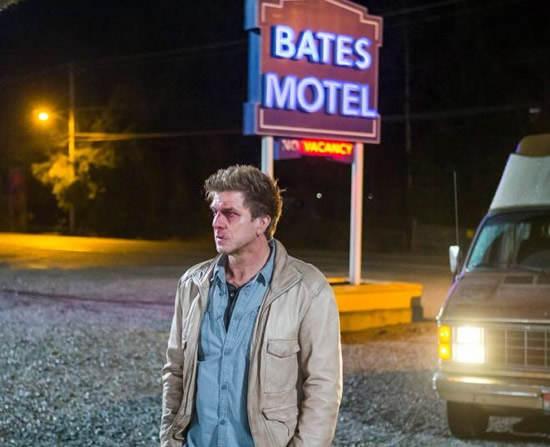 Overview: Caleb pays Neighbor Hogan a visit and gives him the Cliff Notes version of the run.  Hogan asks for his guns and money to which Caleb demands the fee promised.  Hogan offers to discuss it over a drink then pulls a gun on Caleb before getting the snot beat out of him.  Caleb stops short of killing Hogan but threatens to do so if he ever goes near Dylan again.   When Dylan returns to the farm, a bloodied Caleb gives him $50K and tells him that they need to lay low for a while.

Dylan visits the DeCody home.  Mr. DeCody accepts the $50K and promises to return what he doesn’t use and pay back the rest.  Dylan refuses repayment but asks that Emma never learn the truth.   Dylan goes upstairs and wakes Emma from her nap. When he sadly tells her that Caleb has left the farm, Emma softly reveals that she knows they are father and son.  Dylan leaves after an awkward moment of closeness.

Norman secretly checks Bradley into the motel upon her return to White Pine Bay. She doesn’t want to be dead anymore and asks Norman to tell her mother that she’s alive. Norman and Bradley go to Bradley’s house in time to witness the widow Martin leaving the house with her new man. Using a stashed spare key, Bradley tours her old home with Norman in tow and discovers her bedroom converted into an exercise room.  Bradley expresses that she doesn’t want to be alone anymore but Norman declares he must return to mother.  When Bradley asks why Norma never wants Norman to leave the house, he replies that his mother thinks there’s something wrong with him. He agrees.  Norman later tucks Bradley back into her motel bed where she tells him that she’s leaving town and asks him to come along.  He declines and tells her that a neurological disorder causes him to blackout. She attempts to seduce Norman and he goes for it with some shirtless snogging until Imaginary Norma flashes in and out of his peripheral.  He bolts and encounters his hallucination at the motel office door, sultry and scolding.  He is told that they don’t have time for any more trouble and they…er, he heads up to the house with his belt still in his hand.

Norma shows up unannounced at Bob Paris’ house and promises to give him the flash drive if he leaves Norman out of it.  He tells her that she doesn’t get to call the shots anymore and brags how he opened Romero’s eyes to who she really is.  He ends their conversation warning her not to slip and fall into her pool.  Norma stomps into the Sheriff’s Department and demands he return the flash drive so she can give it to Paris and be done with it all. He bluntly tells her that he’s taking care of it now and leaves her cold in the hallway.  Back at the house, Norma bags up Norman’s taxidermy specimens, much to his horror.  She tells him that if the case about Sam’s death gets reopened, they cannot discover that Norman’s hobby is cutting up dead things.  Norman turns on Norma and questions her behaviors, noting that he has always taken her word for it when it comes to his blackouts. While pushing back her hair, he speculates that maybe she is the one who killed his father. Norma immediately shuts him down, observing that Norman is trying to hurt her because he’s mad at her. She orders him to stay in the house until she can ensure they’re safe. He obeys.

Romero is visited by Special Agent Liz Babbitt to discuss the flash drive.  When she questions his dead mother being on the list, he tells her how his father started the pot ring in the 80’s when he was sheriff and used his wife’s name as a cover while he was in prison. She makes a snarky observation that it seems impossible for Romero to have no knowledge of the illicit activities in White Pine Bay, especially considering he was elected sheriff after his father went to jail.  Romero sees no connection and she commends his cooperation before discussing the next steps.  Romero comes home to discover Norma rummaging through his house looking for the flash drive.  He tells her that he turned it over to the DA because he’s done with all the bullshit of White Pine Bay.  When Norma flips that took away her bargaining chip, he forces her against the doorframe and demands she tell him the truth about her husband’s death. Through their shouts, she tells him that she killed him but then begs, “You know the truth. Don’t make me say it.”  She hysterically slaps and punches him, shrieking that she hates him, only to be restrained again in a fervent hold.  Romero struggles to resist kissing her as she sobs. She murmurs for him to stop touching her before staggering away.  Norma returns to the motel and begins frantically shoveling the dirt back into the pit.  Caleb pulls in to leave his guitar for Dylan but announces he must tell Norma something before leaving.  Caleb shares the story of the night Norman visited him at the motel and spoke to him as if he were Norma.  She tries to deny it beneath a glazed stare but Caleb’s ‘goodbye’ is preceded by, “Norman is going to hurt someone. I just hope it isn’t you.”

Opinion: Not sure why “Crazy” is the title of this episode. “Restraint” would have been a much better choice: Caleb restraining from killing Hogan, Norman restraining from having sex with Bradley, Dylan restraining from kissing Emma, Romero restraining from giving in to his Norma addiction.  Regardless, the impassioned dynamics between the characters was spot on.  All of the key players seem to be at a breaking or boiling point which may be a good place to be as we await next week’s season finale.

Keeping the Creepy Score: 2 – Norman’s silly attempt at seducing his mother into admitting something seemed forced.  Bad acting?  Or Norman honing his skills?