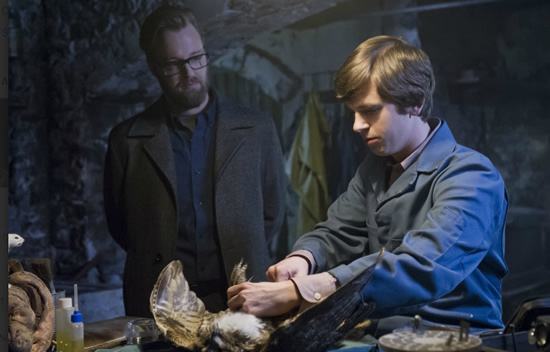 Synopsis:  Norma brings the family together; Romero presses on to regain control of his life; Norman continues to blur lines

Summary with SPOILERS:  Bob Paris discovers a car parked in his private driveway with Marcus Young’s dead body in the passenger’s seat – tagged with a note that reads: “I officially withdraw my candidacy for sheriff.”

Dylan asks Emma out for a “thank you” dinner as Mr. Decody shows up at the motel and insists she comes home, worried about Emma’s active lifestyle. Dylan visits Mr. Decody later and learns he cannot afford the $20,000 that may possibly get Emma bumped up on a lung transplant list.

Dylan tells Norma about Norman’s episode while she was gone and insists they need to address it. Norma professes that she is keeping Norman safe at home but agrees with Dylan’s call for action.  She does not, however, agree that Caleb can join them as a one happy family. Back at the farm, Dylan shoots down Caleb’s thought of visiting the Bates home.  When neighbor Chuck shows up with a donation of pot lamps, Caleb tells him that he can’t take the job after all.  Dylan, thinking of Emma’s lungs transplant, offers to do the job but Caleb prohibits him from doing so for fear things go sour.

Norma returns to her life with a shorter wick and a sharper tongue, annoyed that the world apparently stopped while she was gone. Professor Finnegan calls Norma repeatedly with no success and finally shows up unannounced at the house. Norma unconvincingly updates that all is well but quickly admits that she worried about Norman and wants Finnegan to speak to him down in the basement. Norman sends Norma upstairs and grins as Finnegan assures him not be nervous. Norman talks about the peace he finds in taxidermy before asking, “How was it sleeping with my mother?” They volley inappropriateness back and forth until Finnegan finally asks Norman if he wants to sleep with his mother. Enraged, Norman tackles Finnegan to the stairs, squeezing his throat to the brink of strangulation.  Finnegan flees up the stairs and calls out, “Get him some help, Norma!  Right away!”  When Norma asks Norman what happened, he replies that Finnegan said horrible things to him. Norma apologizes, snuggles him from behind and declares that nothing means as much to her as being his mother.

Romero visits Norma at the house to make sure that Bob Paris hasn’t sent someone to try to kill her, too. He tells her that she has put them both in danger and demands to see the contents of the drive. Norma stoically tells him where it is hidden and that Gunner knows how to break the encryption. When Romero arrives at the farm, Gunner plays dumb but complies when threatened.  Romero browses the entries and, disturbed by one of the names he sees, ejects the drive and heads to the Arcanum Club.  Before approaching Paris, he whispers to the elitist thug (the same dude who drove Norma off the road and followed her about Oregon) that he’s looking forward to the day he kicks his ass. Paris smiles and asks, “Finally saw your mom’s name on that ledger?”  Romero’s father set it up years ago to collect his share of the drug profits although his mother has been dead for over 20 years. Romero visits his crooked cop dad in prison and threatens to kill him if he doesn’t take her name off the ledger.  He teases Romero for making such a big deal out of things and adds that Romero has always blamed him for his mother’s death. Romero accuses him of driving her to suicide.  After drowning his sorrows, Romero calls Norma for a ride, too drunk to drive himself.  She tucks him in safely in one of the motel’s beds where he confesses what he learned that day.  He gently takes her hand and as his caress goes from her arm to her shoulder, Norma leans in but catches herself in time to only bring the blankets closer to his chin. As she leaves the room, Romero cooes, “I think you’re beautiful.” She dismisses the compliment as beer goggles and heads back up to the house to make dinner.

When Norma learns that Dylan has plans to go out to dinner with Emma, she requests that they all have a nice family dinner together at the house.  When she heads out to get fresh herbs from the garden, she sees Caleb ascending the stairs. He has flowers (her favorite) and a note thanking her for talking to him. When Norma tells him that they cannot be friends, he politely says ‘goodbye’ before Norma changes her mind and invites him to dinner…just for tonight.  Caleb comments on the piano and a brother/sister duet ensues.  Norman enters and accuses Dylan of inviting Caleb then learns it was Mother’s choice.  Romero pops in the front door to thank Norma and she insists that he join them for dinner.  The six of them break bread; Norma thanks everyone for being there, Dylan toasts family and friends, Caleb adds a sentiment about his sister and Romero gestures a familiar nod to the hostess.

Opinion:  Mr. Decody (younger, taller and Welshier) makes an appearance for the first time since Season One with heaps of reminders about Emma’s ticking clock. I get that Emma and Dylan have bonded over being shut out but this courting thing is plain weird.
Love, love, LOVE learning more about Romero’s past.  Also, the yin yang of his numerous threats coupled with his uninhibited affection…sigh. A little miffed at Paris playing it so cool. I mean, not a single word about Young’s bloody corpse??

“Keeping the Creepy” Score: 7 – The exchange between Finnegan and Norman is creepily fantastic. Norman kneeling at his sleeping mother’s bedside while he wantonly glides his hand across her hip? How about dubbing a pop standard over the whole scene? “I know you belong to somebody new. But tonight you belong to me.” Zing!